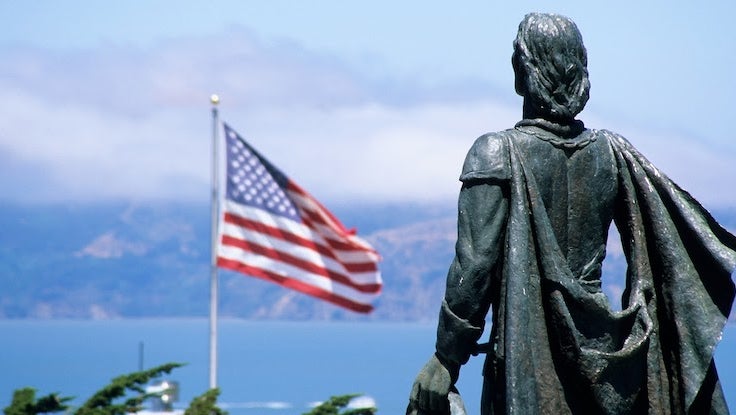 Back in grade school, many of us learned about the achievements of Christopher Columbus, the Italian explorer who supposedly discovered "America." We were taught about the bravery it took for him to embark on a treacherous journey across the ocean and the steadfastness he exhibited in navigating life in a new (to him) land. Unfortunately, we were taught wrong about the motives behind Columbus’ expeditions — and the toll those voyages ultimately took on Indigenous populations that were thriving before his ships reached the shores of San Salvador Island in the Bahamas.

It’s taken decades to unravel the stark and disturbing truths about the atrocities Columbus actually committed, and many people still aren’t aware of the reasons why there’s been pushback against honoring the explorer. Those who are have been left to wonder why we’re continuing to celebrate him with a federal holiday — and are responding by protesting and pushing for change.

In an effort to reconcile the existence of this controversial holiday, many cities and states have begun celebrating Indigenous Peoples’ Day in place of Columbus Day on the second Monday of October. This relatively new holiday champions the cultures, positive accomplishments and resiliency of Native populations instead of glorifying a man whose activities set in motion a genocide of their ancestors. Honor their truth on Indigenous Peoples’ Day and every day by learning about the realities of Columbus’ impact — starting with these facts you likely weren’t told in school.

Slavery Was Columbus’ Goal From the Outset

History has an interesting way of glossing over off-putting details in the name of making things palatable, especially for kids — just look at Thanksgiving if you need more proof — and Columbus’ story is no different. While many of us may have believed that the explorer’s interactions with the Indigenous Taíno people were purely transactional, reciprocal and even conflict-free in an effort to facilitate trade, the reality was that there was much more violence and exploitation than that — much of it in an effort to enslave people and find gold, Columbus’ main goals for the voyage. 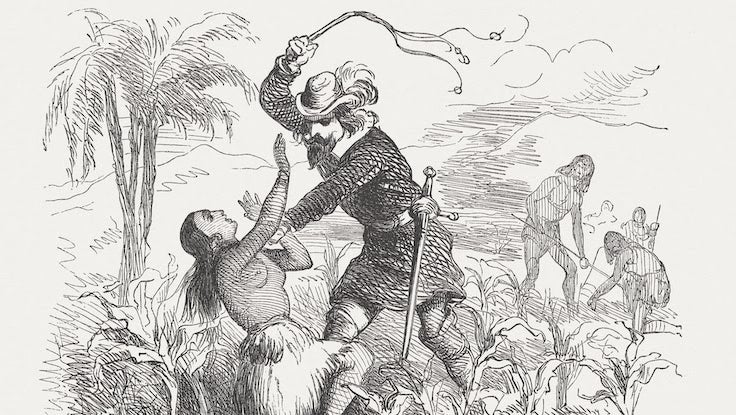 While it’s true that when Columbus initially landed in the Bahamas in 1492 the Taíno people were friendly and welcoming to the explorer and his crew, this kindness was not repaid. Instead, Columbus was assessing their viability to serve as slaves: "On his first day in the New World, he ordered six of the natives to be seized, writing in his journal that he believed they would be good servants." In his writings he described them as "incurably timid" and noted, "With fifty men we could subjugate them all and make them do whatever we want." He sent these original six people, and later thousands more, back to Spain to serve as slaves.

Columbus also enslaved people who remained on the islands and forced them to submit to his whims. His blatant disregard for human life made it easy for him to view the populations he encountered as nothing more than commodities. Convinced that the islands were filled with gold, he began capturing and forcing Taíno people to search for the precious metal in crude mines while subjugating others for work on plantations.

When Columbus realized gold was nowhere to be found, he decided to sell something else: human beings. He brought thousands of enslaved people at a time back to Spain. Hundreds died on these voyages across the Atlantic and once they’d been sold, but many more died directly at Columbus’ hands. Although there’s no direct evidence indicating the explorer’s personal involvement, members of his crew even captured children to sell into sexual slavery. From the beginning, Columbus’ goal was to exploit land and people — and the dehumanization would only worsen.

Columbus realized early on that, in order to control and enslave the Taíno people, he needed to instill fear into them. And perhaps, seeing them as less human than himself and his crew members made it easier for him to justify violence in the name of achieving the fame and riches he was after. Whatever the reason, the undeniable truth is that Columbus levied unimaginable brutality against the populations living in the areas his party invaded. 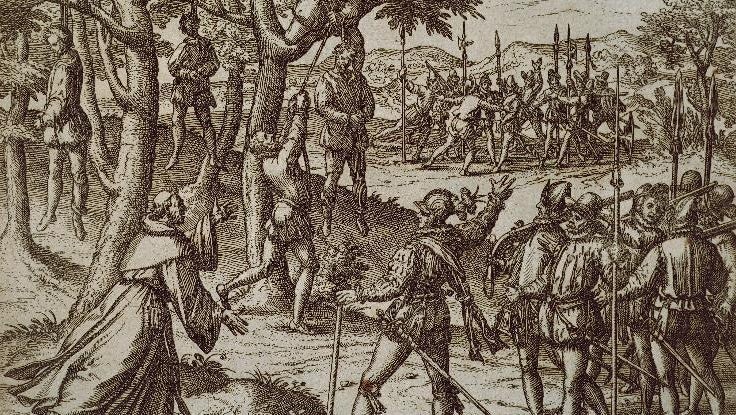 Columbus was in no way a merciful person. If someone spoke out against him or failed to follow orders, they risked abuse in exceptionally cruel ways; one of his most common punishments involved ordering victims’ body parts to be cut off. Columbus set a quota of gold that all Taíno people over the age of 14 had to meet, and they were required to hand over whatever they found. When someone didn’t meet that quota, Columbus is said to have cut off their hands. To maintain control, Columbus also slaughtered many Taíno, dismembered them and paraded their body parts through the streets. Some enslaved people were chained up by their necks while performing forced labor, and when they were near collapse and becoming too exhausted to carry on, Columbus’ men reportedly beheaded them instead of taking the time to unchain them.

Whippings were also carried out as public spectacles. This punishment took place often and in response to actions that didn’t warrant punishment whatsoever. For instance, one man received 100 lashes for not gathering enough food to fill Columbus' pantry. A woman was stripped, put on a donkey's back and whipped. Her "crime"? Being pregnant in public. Columbus used any justification he could fabricate as an excuse to commit extreme violence and maintain control.

When they weren’t killing Indigenous people, the Spaniards exploited them in other ways. A young priest named Bartolomé de las Casas began to record other examples of the cruelty that the Spaniards directed toward the native groups. Writings from de las Casas indicate that the Spaniards didn’t walk to their destinations, instead riding on the Taínos’ backs as though the people were horses. Some Spaniards also forced Taíno people to carry them on hammocks, while others carried large leaves to shade the Spaniards and goose feathers to fan them. The priest had kept several enslaved people of his own until he fully realized the cruelty the Spanish were inflicting, which caused him to free the Taíno people he was holding captive.

Hispaniola’s Indigenous population, the Taíno people, were living in a thriving society of various kingdoms long before Columbus arrived. They’d developed extensive and advanced agriculture practices and cultivated numerous crops that included cotton (out of which they crafted fishing nets), tobacco and a wide variety of vegetables. The Taíno built massive canoes that could carry up to 100 people at a time to facilitate water transportation. Meaningful rituals were a large part of the daily lives of this group, which had "complex hierarchical religious, political and social systems." By all accounts they were flourishing — until Columbus’ arrival. 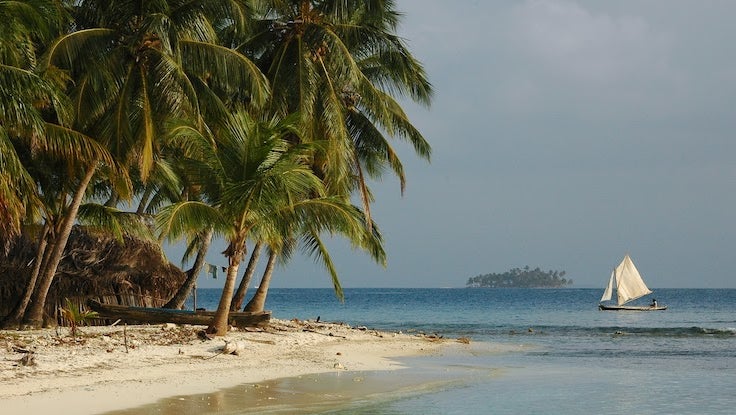 When Columbus and his men landed ashore, they unknowingly brought with them what amounted to a form of biological warfare. They, at the very least, carried influenza, smallpox and measles, which they quickly transmitted to the Taíno population. Of course, the Indigenous populations had no immunity to these outside diseases that they’d never encountered before. This had devastating consequences for the islands and communities Columbus and his crew traveled to; the Library of Congress notes that, "by 1550, the Taíno were close to extinction, many having succumbed to diseases brought by the Spaniards" — and that was if their deaths didn’t directly result from Columbus’ outward violence.

Before Columbus' arrival, scholars believe that there were as many as 3 million Taíno people on the island of Hispaniola alone, but that population decreased tremendously for a variety of reasons related to the explorer. While Columbus did have thousands of people killed outright, many died from disease. Others are said to have committed mass suicide to escape him. Enslaved people were worked to exhaustion and became malnourished to the point of death. Not that there was much to eat — because Columbus had enslaved so many Taíno people and had them working in mines and on plantations, few remained behind to cultivate and work traditional crops. The dwindling food source left much of the population with little to survive on. Potentially 85% of the Taíno population had vanished by the early 1500s, and as they disappeared, so did their traditions and societies.

The Glorification Wanes as Awareness Grows

It’s clear that Columbus left a legacy. But it’s a different legacy than the narrative so many of us have believed for so long. Even in death, Columbus is a source of contention and discord — and rightfully so. The explorer’s greed, hunger for power and total disregard for humanity should cause us to question why we continue to observe a federal holiday dedicated to such a violent person — one who never even set foot in what’s now the United States. 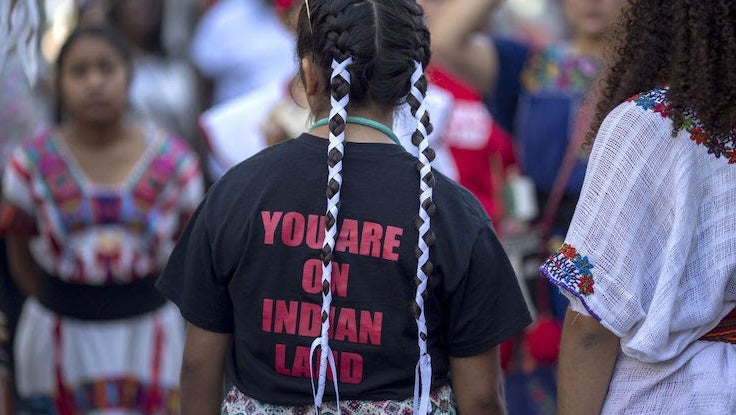 Fortunately, this questioning has led to some dramatic changes for the better in what we commemorate on the second Monday of October. Areas around the country have seen a noteworthy push to replace Columbus Day with something more meaningful: Indigenous Peoples’ Day, which shifts the focus to "honoring Indigenous communities and their resiliency in the face of violence by European explorers like Christopher Columbus." This holiday celebrates and emphasizes positivity and cultural awareness instead of a cruel colonizer whose actions ultimately led to genocide. Although we can’t change the past and shouldn’t ignore its trauma, we can shape the future into something brighter with changes like celebrating Indigenous Peoples’ Day. Rethinking what we honor and why can lead us further down that path.