Picture this: You’re participating in an important race — and losing — when suddenly an outside force changes the momentum so that you have a chance to come out on top. Now, picture nearly winning a race when an outside force knocks you out of place and you finish in a different position. This, by and large, summarizes the gameplay experience of one of Nintendo’s most popular video game franchises, Mario Kart.

One more scenario to visualize: Picture yourself nearly winning a race. No outside force hurts your standing on the course, and outside forces, if anything, help you finish before everyone else. The gap between first and last is so large that the audience exits before the person in last place crosses the finish line. This, while oversimplified, is how economies function in countries and communities all over the globe. And that was before the COVID-19 pandemic stratified things even more.

With economies in unstable flux after a year of quarantining, more experts are looking for different models to inform a new economy that brings equity to more people. Nature, a publication dedicated to studying the environment and researching policies that create a more equitable Earth, recently published findings from Boston University professor Andrew Reid Bell. Bell’s study looked into the ways Mario Kart’s features could actually serve as a model for a better economic future.

What the research also found is that we need are more blue turtle shells. Red shells, too. And even some lightning bolts. All of these are items in the Mario Kart franchise that confer benefits to players — and, interestingly, they’re items that need to be translated into economic policy in some way or another. Here’s what that means and how it might happen.

The first game in the Mario Kart franchise was released in 1992 for the Super Nintendo Entertainment System (SNES). In its near 20 years on Earth, its formula hasn’t changed much. Competitors race against each other, playing as some of their favorite characters from the Super Mario Bros. franchise.

To make the races more interesting, unpredictable and competitive, players can collide head-on into iridescent blocks that hold different items inside — items that range from banana peels that make another player spin out to speed boosts to turtle shells that make another player crash. While traveling around tracks with names like “Cheese Land” and “Donut Plains,” players also find boosts like invincibility stars and lightning bolts that make all other players shrink and slow down for a few seconds. The shell colors are bound by some key rules, too. Green turtle shells launch in whatever direction a player deploys them to, red shells travel directly to the next-closest player in range and blue shells target the person who’s in first place.

Why do these power-ups matter? Not long after playing the game, it’s not abnormal to notice a pattern in how the items are distributed. The quality, strength and type of advantageous item a player receives depends on their position in the race — but not in the way you might think. The players in the lead are more likely to receive less-helpful items like banana peels, and the players on the tail end are more likely to to receive game-changing items like lightning bolts or stars that help them advance much faster.

This system of item distribution makes it intentionally difficult for any one player to maintain a first-place lead. The game’s design also makes it possible for someone in last place to come out on top. Folks in the middle of the pack could also go one way or another.

These races, usually lasting around five minutes each, are competitive but also fun. Skill is still a factor, but when it comes to chance, the odds aren’t stacked for or against any particular player. If these races didn’t have an ending — if they just went on and on while more players joined and other players left — what would that look like? Moreover, what would a society run like that start to look like? That’s part of what Bell’s research aimed to find out — and what he discovered was that giving similar power-ups in the form of direct assistance to low-resource farmers in the developing world could help reduce poverty overall.

Let’s take a minute to discuss rubber bands. They’re made of rubber, and they can stretch out if you pull on them. Stretch a band out too far and it might break. It’s simple enough, but this everyday item makes a great metaphor. In this instance, rubber banding, or “rubber band theory,” can be applied to both game design and systems of economics.

It’s no secret the global economy is experiencing some massive shifts, especially in the wake of the pandemic. CBS News reports that from March 21, 2020 to March 21, 2021, the wealth of the world’s billionaires increased from $8.04 trillion to $12.39 trillion. One example? Jeff Bezos’ wealth rose from $113 billion to $178 billion — an increase of 54%. Few can say they’ve seen a similar increase in their own wealth, percentage-wise, particularly during the pandemic, and this further highlights how wealth gaps are growing globally.

When it comes to video games, and designing competitions in general, the resistance or friction that occurs when pulling back a rubber band is mimetic of a good sport. Winning feels amazing, but winning despite a hard-fought struggle is what keeps players coming back to their games and pursuing progressively more challenging levels and titles as they continue to play and beat each one.

People love watching close games — triple overtimes with a back and forth. The same principle applies to video games. If you waltz into a dungeon and save a princess with no enemies to fight, puzzles to solve or other adversity to face, are you really going to “save and continue” your way through more of the same? This is also why games get harder as you progress through them. As you learn how to play, the skills you develop are put to the test bit by bit until the game culminates with a final boss.

Similarly, Nintendo created a game that makes players want to hit the tracks again and again — they never know what new power-up they might receive to change their race outcome for the better. The game’s objective is not to “go” anywhere specific but progress in difficulty and beat your own record. This is where the items and the Mario Kart principle come into play. Running over a banana peel and being struck by lightning are elements that keep someone playing. That “rubber band” is pulled back a bit. A victory despite the challenge of facing other racers is what truly satisfies players.

This rubber band philosophy can also be applied to economics. There’s the force that happens when the band is pulled back that mimics the friction of life and, in most cases, the work that needs to be done to progress economically. But also present is the idea that, if a rubber band is pulled back far enough, it’ll shoot forward in the direction it’s pulled in.

So, if one is doing well financially or in life, that rubber band is loading up and is about to be (figuratively) shot forward. When things aren’t going the best — or, say, someone’s playing a video game and hasn’t quite hit the skill levels needed to win the game — that band would be shot to a lower level, in theory.

With income inequality in its current state — the United Nations explains it’s “risen in a startling number of countries” over the past 30 years —  one could argue that the rubber band has broken. If there were more checks and balances to keep people closer in line to each other, economically speaking, wouldn’t everyone come out on top?

Consider 2020 and the COVID-19 pandemic. Mario Kart 8 Deluxe for the Nintendo Switch sold 10.68 million copies from April 2020 to March 2021. When humanity could not leave their homes, they needed something just as satisfying as viral soap-cutting videos that they could put hours and hours into. People can gravitate towards struggle in situations where they need satisfaction and something worthy of their time. If people can enjoy Mario Kart this much in their leisure time, what if we applied its design to different methods of life?

As it turns out, Mario Kart might make a model for more than economic inspiration. Experts are also hoping to use this system to better regulate the environment, an idea that Bell’s findings also support.

Bell argues that if leaders enact policies that help farmers in rural, developing regions or those that lack access to food, the world would be greener and more equitable. This could mean supporting urban farmers in cities, especially in neighborhoods with food deserts. It could also mean providing more monetary support for rural areas where people have to travel far to reach food. What if, instead of turtle shells, we gave farmers healthcare, financial incentives to adopt greener farming practices, and other forms of support necessary to empower communities?

Farmer’s markets empower local communities, so being able to bring that type of energy and those opportunities to areas that don’t get to experience them could be vital for helping those groups (and the planet) thrive. If food sources become as local as possible, less money and fewer resources like fossil fuels would need to be used to haul food on highways across the world. There are programs that help farmers already, sure, but we may need more of them. Maybe, to put it in Mario Kart terms, we need to offer more lightning bolts and stars compared to the banana peels and turtle shells that haven’t helped in intended ways.

If children can learn and love Mario Kart, could we employ the same strategy to fix systemic economic issues? It may take a few golden mushrooms and bolts of lightning, but a Mario Kart strategy for public policy might be the track we need to follow for a better tomorrow. 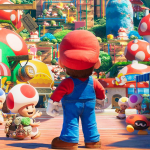 From Mascot to Movie Star: Celebrating The History of Super Mario
1