7 Unusual Christmas Traditions From Around the World

Each year, people across the U.S. look forward to sharing plenty of unusual Christmas traditions of their own. From navigating the Armageddon that is Black Friday to enjoying refreshingly regional pursuits like caroling in creepy caverns, we’ve developed plenty of unique customs that help us fully immerse ourselves in a little holiday-appropriate weirdness.

We’re not alone, though — there are many other fantastically odd Christmas traditions that play out each year all over the globe. Let’s take a look at some of the most delightfully peculiar holiday traditions people revel in.

Bundling Up to Avoid a Visit From the Yule Cat

If you thought your mom was a stickler about making sure you looked your best on Christmas, just be thankful you didn’t have to face the fashion-forward furiosity of Iceland’s Jólakötturinn, or “Yule Cat.” According to legends dating back to medieval times, Yule Cat prowls the streets after the sun goes down on Christmas Eve, looking to make a tasty snack out of anyone who hasn’t received new clothes for the holiday.

While this may sound strange — and even like some catty class discrimination — it makes a bit more sense in the context of history. In the days of yore, wool production was a vital part of life in Iceland, both for economic reasons and for staying warm as a matter of survival. So, getting wool clothes for Christmas was kind of a given. It was only possible, however, if everyone in the family worked hard to complete the necessary tasks around their farms to gather and process the wool. The legend was probably invented as a way to startle the unmotivated into getting it together, lest Yule Cat feel tempted to turn them into festive Fancy Feast when Christmas Eve rolled around.

Chowing Down on Christmas Chicken

In the mid-1970s, people around Japan found themselves unable to escape what may have been one of the most enduring marketing campaigns of all time. Throughout the decade, Japan’s economy was booming, and the country saw a meteoric increase in its number of foreign fast food franchises.

While Christmas isn’t widely celebrated as a religious holiday in Japan, it’s embraced as a day of secular celebration. Back in 1974, KFC launched a campaign called “Kentucky for Christmas” that featured Santa Claus-themed displays and ads showing families enjoying holiday buckets of drumsticks and thighs. The campaign took hold in a huge way and inspired a Japanese tradition people look forward to to this day. Every year, families all over the country preorder buckets of KFC chicken to enjoy together on Christmas Eve.

While this is an unusual Christmas tradition, the legend behind it is captivating. According to Ukrainian folklore, there was once a poor widow who had a few children. The holidays had her heartbroken because she couldn’t afford to buy decorations for the kids, who longed to embellish their small, Charlie Brown-esque Christmas tree. But on Christmas Eve, the spiders in the house decided to put their best Charlotte’s Web skills to good use.

Throughout the night, they spun beautiful webs all over the tree, decking it out in glimmering holiday splendor. In the morning, the light of the sun transformed the webs into silver and gold, and the family found themselves blessed with riches. Ukrainians still decorate their Christmas trees with fake spider webs to this day to keep the story alive and usher in good fortune for the new year.

While the tradition of the hidden Christmas pickle is believed to have sprung up in Germany back in the 16th century, it’s not that surprising that this amusing custom has found (and maintained) popularity all over the world. On Christmas Eve night, tradition dictates that someone in a household hides a pickle within the branches of their family’s Christmas tree. For obvious reasons, glass ornaments are the preferred form these days.

In the morning, the first person to uncover the hidden pickle gets an extra present from Santa. Although the origins of the tradition are rather dubious — some historians believe the custom was actually started by a German immigrant in the United States — it’s a fun one nonetheless.

Crisping Up Some Crunchy Caterpillars

The caterpillar in question is not only quite large but also bears a variety of Christmassy colors — at least, it does before being cooked. As an added bonus, the crawly creatures are reportedly a good source of protein.

Tradition states that some kids even used to sleep with one end of a roller skate lace tied around their toes while the other end dangled out the window. The idea was that their friends could tug them to consciousness on Christmas morning so they wouldn’t miss any festivities.

Among the most hilarious Christmas traditions on our list is Tió de Nadal, a “pooping log” that’s also a much-anticipated holiday guest in parts of Spain, including Catalonia and Aragon. Kind of like a bathroom-centric version of “Elf on the Shelf,” the friendly logs generally appear in homes sometime in early December, when the kids of each house are expected to take them in and care for them until Christmas.

The smiling log is often “fed” and covered with blankets in an effort to nurture it into defecating gifts on Christmas morning. Things get real for Tió de Nadal when the holiday arrives, as the children then put it in the fireplace and beat it with sticks. They also sing songs encouraging the log to dispense gifts from its backside — gifts that have secretly been hidden beneath its blanket by parents beforehand. 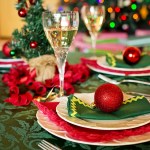 Fun Ways to Decorate Your Home for Christmas
2 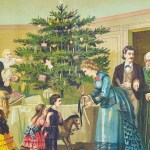 What Is the History of Christmas Trees?
3 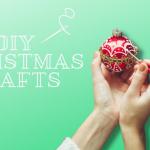 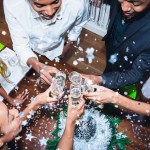 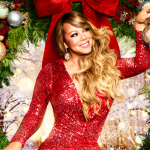