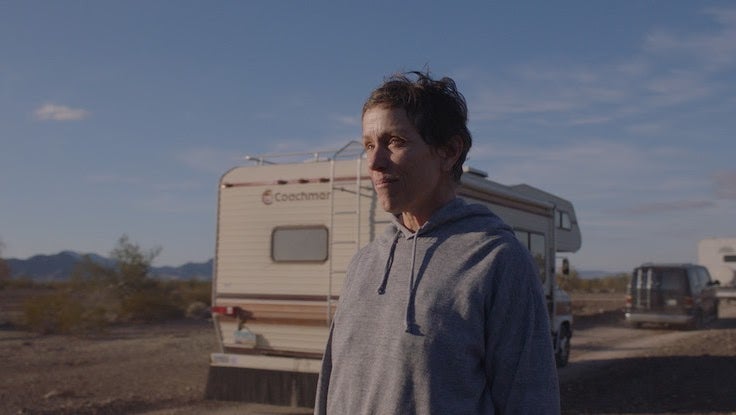 Watching last year’s Oscars ceremony, I was as stunned as director Bong Joon Ho when his film Parasite won four Academy Awards, including Best Director and Best Picture. It wasn’t because I didn’t feel Parasite was one of 2019’s best movies — but precisely because the Oscars sometimes have the habit of not awarding the best movies. (The previous year, Green Book had won Best Picture amid controversy and despite superior film nominees like Black Panther, BlacKkKlansman, Bohemian Rhapsody, The Favourite, and Roma.)

This year the movie to beat at the Oscars should be Chloé Zhao’s Nomadland. Written, directed, produced and edited by Zhao (The Rider), the film is also produced by actress and star Frances McDormand. The two-time Academy Award-winning actress had bought the film rights to the non-fiction book Nomadland: Surviving America in the Twenty-First Century, along with producer Peter Spears (Call Me by Your Name). After catching a screening of The Rider at the Toronto International Film Festival (TIFF) in 2017, McDormand realized Zhao was the ideal director for this project.

Nomadland is a neo-western set in 2011 that follows Fern (McDormand), a 61-year-old woman forced to leave her home in Empire, Nevada, after the town is decimated by the Great Recession. Fern becomes a modern-day nomad, living out of her van. She works seasonal jobs at an Amazon fulfillment center, a sugar beet harvesting farm, a cafeteria, a gift shop, and in a National Park. The movie and Fern take the viewer from the Badlands in South Dakota to Western Nebraska, and from Yuma, Arizona to the rugged coast of Mendocino County in California. 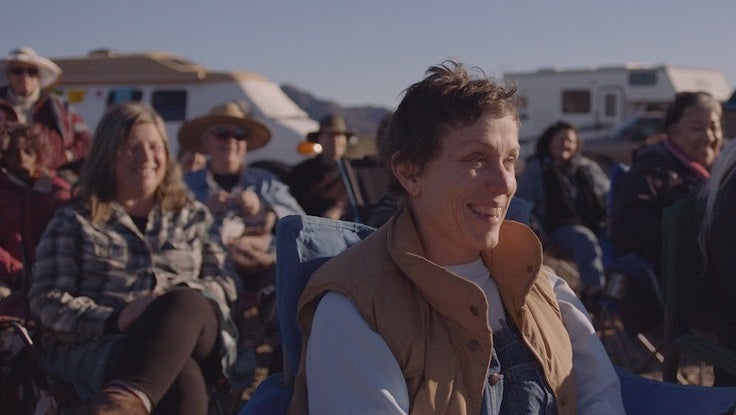 Like in her previous films — Songs My Brothers Taught Me and The Rider — Zhao worked on Nomadland with an array of non-professional actors playing a version of themselves. Professional actors, like McDormand and David Strathairn, performed alongside real-life nomads Swankie and Linda May.

"There are very few who could do what she did," said Zhao about McDormand’s work in Nomadland. "We take it for granted, that she just shows up on set and just does it. She’s not afraid to make a fool of herself [...]. She’s definitely compassionate enough to allow her vulnerability to show on camera. No actress will allow you in like that. And the camera is so sensitive to that stuff, the camera will know a lie. [The camera knows] if an actor is doing his or her thing and not connecting with another human being, especially if you sit across from a non-professional actor."

To fit in more with Nomadland’s world and real-life people, McDormand worked with Zhao to bring some elements of her life to the character. The actress suggested crafts and brought a bag of potholder loops to the set. She made about 75 potholders during production as gifts for people on the road and on Nomadland’s crew. Some potholders also ended up as props in the movie, as did a set of dishes gifted to McDormand by her dad when she graduated from college. The dishes are prominently featured in the film.

Another aspect of Nomadland’s realism is its portrayal of Rubber Tramp Rendezvous (RTR). An annual gathering of nomads in the Arizona desert organized by Bob Wells, RTR "offer[s] an alternative lifestyle in alternative housing." Wells is another one of the non-professional actors in the film and RTR makes an appearance as well.

Nomadland’s team recreated the nomadic assemblage by contacting people who had attended the first RTR’s in 2011, which, Wells estimates, had around 45 participants. In contrast, 2019’s RTR had 8,000-10,000 participants. Nomadland’s production team asked the nomad attendees of the 2011 gathering to send them pictures. Some of those people ended up in the film, along with their vehicles.

Zhao is grateful the COVID-19 pandemic caught her while she was already done shooting Nomadland. "You have no excuse to miss your deadlines," joked the director, referencing how it was to edit her movie during the pandemic. "I was very blessed to have that job while that was happening, it would have been so much worse if it was writing. Because I feel more at home editing than directing. This is my limitation, this is the footage I have. It’s just about problem-solving every day." 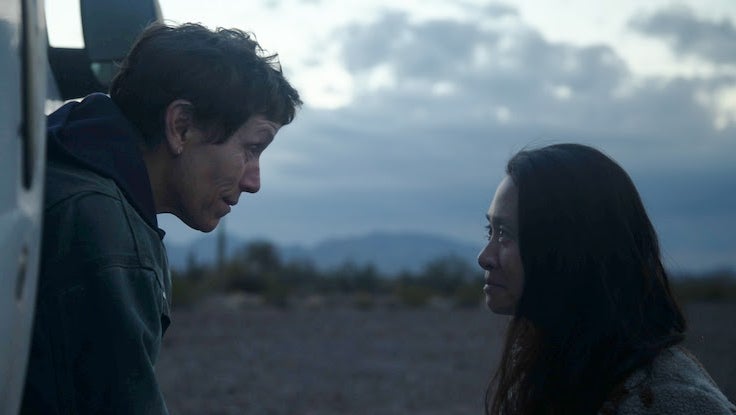 The filmmaker, who was born in Beijing, China, but has been living in the US since 2000, is based in Ojai, California. She shares a house with her two dogs, three chickens, and partner, frequent collaborator and cinematographer Joshua James Richards. Zhao could make history by becoming the first Asian woman to be nominated for an Oscar as a director for her work in Nomadland.

The movie is also a favorite Academy Awards contender in the Best Picture and Best Actress categories, where it could grab McDormand a sixth nomination as a performer. Richards is also expected to receive a Best Cinematography nomination.

But even if Zhao and her film don’t win big at the upcoming Oscars ceremony, you can expect to keep hearing her name. The filmmaker has also directed Marvel’s tentpole Eternals, set to be released November 5, 2021. Eternals’ star-packed cast includes Salma Hayek, Angelina Jolie, Gemma Chan, Richard Madden, Kit Harington and Kumail Nanjiani — and it has a reported budget of $200 million. Quite the contrast compared to Nomadland’s mid-seven-figure price tag. It’ll certainly show us a different side of Zhao as a filmmaker.

Nomadland will be released in theaters and available to stream on Hulu this Friday, February 19, 2021.