How COVID-19 Inspired an Animation Renaissance 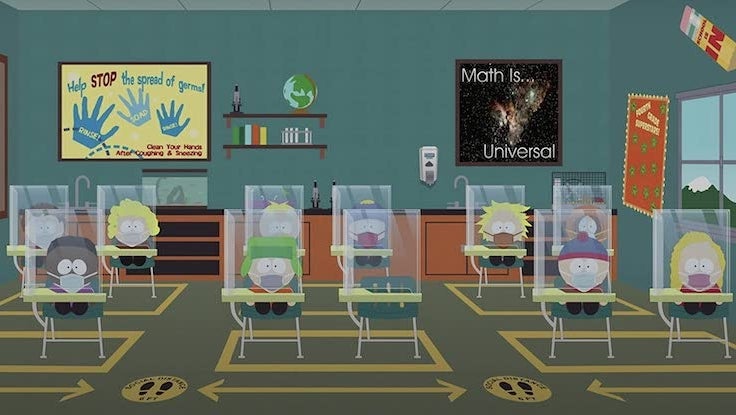 Perhaps it comes as no surprise that the coronavirus pandemic has led to a surge in TV viewership, as the world has been hunkering down in compliance with shelter-in-place orders. With many stores temporarily closed, professional sporting events canceled and movie theaters out of commission, streaming services and television have become entertainment lifelines for lots of us. And some shows — namely South Park, whose "The Pandemic Special" episode garnered the series its highest live and same-day ratings in seven years — have even addressed current events with timely commentary (along with hefty doses of helping-us-cope humor).

The COVID-19 pandemic has sent many live-action Hollywood productions spiraling as the industry attempts to reckon with the implications of sheltering in place and following social distancing guidelines — two modifications that make working on a set all but impossible (not to mention irresponsible and potentially dangerous). Throughout it all, however, animation-based programs have provided a haven, a fantastical escape from what’s happening in the real world. As people of all ages find themselves quarantined at home together, cartoons are stepping up to the plate to fill a pandemic-sized entertainment void.

When the novel coronavirus began prompting citywide and statewide shelter-in-place orders back in March of 2020, few of us could have predicted just how long the fallout would last. But as the weeks wore on, it became increasingly clear to many Hollywood professionals that the pandemic was going to turn life as they knew it upside-down. 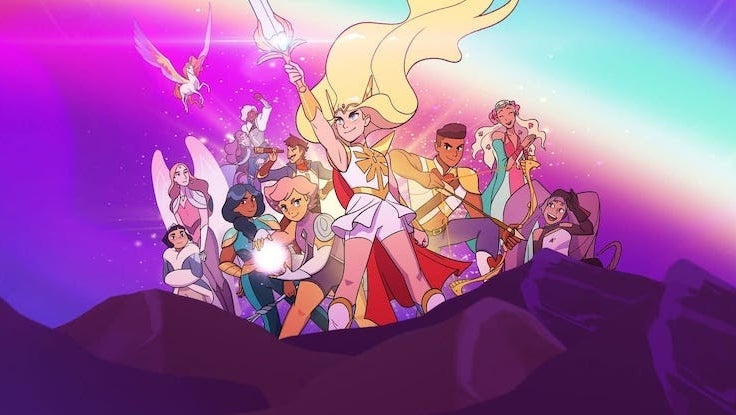 As a number of Hollywood's biggest stars, including Tom Hanks and Robert Pattinson, began contracting the coronavirus, it became clearer that live-action TV shows and movies would need to cease production. Reality TV shows likewise took a hit, as popular series like Discovery Channel's Naked and Afraid suddenly became the stuff that COVID-19 transmission nightmares are made of.

Even as TLC produced a spin-off show called 90 Day Fiancé: Self-Quarantined — remember the stage of lockdown when Rosemarie and Big Ed were dominating the meme airwaves? — the network's president and manager Howard Lee warned that it wouldn't be the typical reality program. Gone would be the exotic locales and steamy intimacy that many reality shows had come to depend on. "This series will look very hot-off-the-press — it will look like the paint has not dried," Lee told Variety. The decision to have former cast members record show content themselves from home was a novel idea, sure, but one missing the semi-refined production values, the feeling of cohesion, viewers expect from live TV.

Of course, while 90 Day Fiancé: Self-Quarantined wasn’t going to be the typical reality program, other TV shows and movies weren’t going to be typical, either — in large part because they weren’t going to be made at all for the foreseeable future. This pause in production paved a perfect path for animated shows to rise to the forefront of our pandemic-entertainment consciousness.

Throughout the confusion of adapting to a socially distanced culture, animation has been one of the only mediums that's really been able to achieve the status of pandemic-proof programming. "Everything we do can be done on a computer at home," explained Marci Proietto, executive vice president of animation for Disney’s 20th Century Fox Television. "We’re moving forward on all our series, which is kind of miraculous." Fox CEO Lachlan Murdoch added, "The production schedule for animation is virtually untouched, knock on wood, by COVID-19." Murdoch also confirmed that animation has been "a great boon" to the studio during the health crisis. 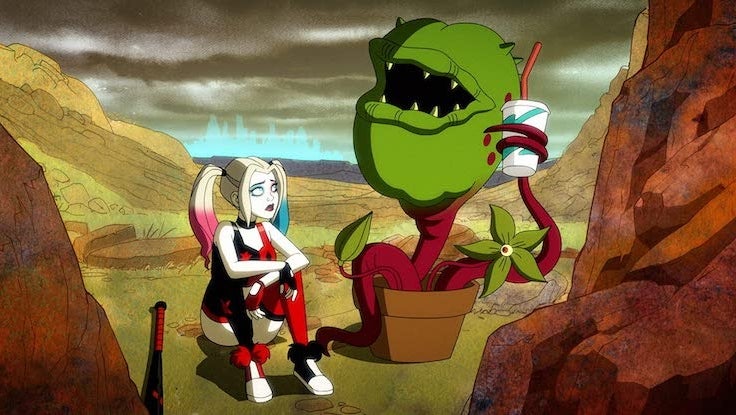 And it’s because animators can do so much from home that we’ll likely be able to get our fix of much-needed newness through cartoons. From late March, when new episodes of The Simpsons and Bob’s Burgers were still making it to the air thanks to "creative teams working in sync from home," to the September 30 airing of "The Pandemic Special" and beyond, production companies have been able to handle just about everything virtually, from table reads to remote scoring to Zoom teleconferencing to the animation itself.

Thanks to this easy transition to remote operations, animated shows such as The Simpsons, Family Guy and Bob's Burgers remain network staples, while several streaming services are able to bring newer animated series to the table. Netflix recently introduced new adult cartoons The Midnight Gospel and Agent King, while former DC Universe series Harley Quinn plans a move to HBO Max for its third season.

But even when the content isn’t new and fresh, it seems like people are turning to animation during the pandemic, perhaps for some comfort or "for light entertainment as an alternative to a diet of grim news coverage." Disney+, which started growing in its share of streaming hours when the pandemic began, offers a wide variety of both classic cartoons and newer animated series to captivate just about everyone. Many parents are now enjoying introducing their kids to cartoons they grew up with, such as Darkwing Duck and 1988's The New Adventures of Winnie the Pooh. Of course, viewers can opt for newer choices such as Star Wars Rebels and a revival of the classic series DuckTales. What better way to navigate the "new normal" of pandemic life than with some stability courtesy of familiar faces and childhood nostalgia?

If we’d been told as children that there would be a huge adult audience for cartoons in the future, some of us might have found the concept unbelievable. Yet, over the past few decades, with the rise of adult-oriented cartoons like Rick and Morty and BoJack Horseman, that's exactly what's happened. These days, many adults even enjoy watching animated programming traditionally geared towards children. 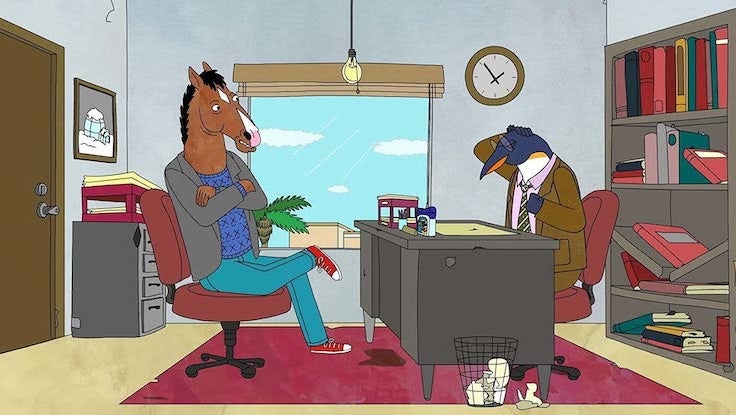 What is it about watching animated shows that's managed to create such a huge adult fanbase? Dr. Laurel Steinberg, a New York psychotherapist, explained in an interview that cartoons are actually beneficial in helping many adults navigate some of life's harsher realities. "Kids' cartoons can be a support treatment because they incorporate themes like community order, friendship, family, teamwork, that good always wins over evil and that the sun will always come out tomorrow," Dr. Steinberg explained. "They can help restore optimism and give someone a break from worrying or feeling sad, all of which can elevate [your] mood." And if there’s one thing most of us probably need during an ongoing pandemic, it’s a break from worrying and feeling sad — an immersive, escapist break that cartoons seem best poised to provide.

Likewise, even adult cartoons seem to restore us to the nostalgia of childhood, the time before the realities of responsibility set in. Cartoons allow us to soar to worlds where literally anything is possible. The fact that we’re used to cartoons being unbound flights of imagination could help to explain why shows like South Park are able to push boundaries that would never work in live-action television. Something inside us loves the idea that when we enter an animated world, anything is possible.

While many of us eagerly await the day that Hollywood is able to resume live-action programming, rest assured that adult cartoons aren’t going anywhere anytime soon either — and they’re not just a substitute for that live-action programming. In a recent white paper, CEO of MondoMedia John Evershed concluded that "adult animation is arguably the fastest-growing animation category with the most headroom for growth." 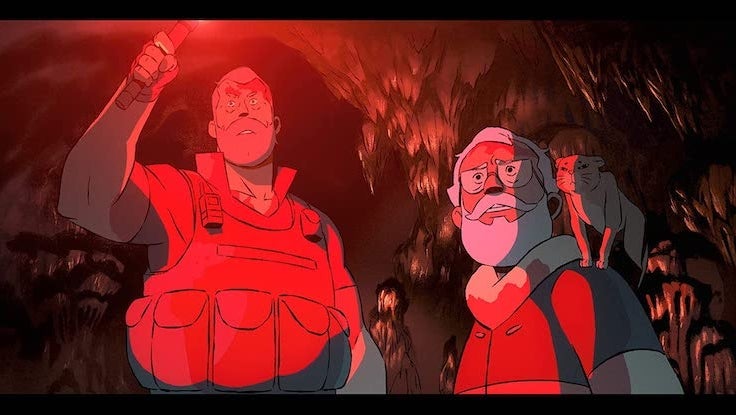 Evershed noted that in addition to classic animation series, adult viewers are also becoming much more comfortable with a wider array of cartoon genres. From dramas such as AMC's Pantheon to Netflix's sci-fi Love, Death & Robots, animated series seem to be flowing into more genres than ever before. That’s great news for all us grownups who can’t get enough of this medium.

For many parents, the challenge lies in recognizing that just because a show is animated, this doesn't necessarily make it appropriate for children anymore. Just like any other show, it’s important to make sure you're familiar with a series before you allow your kids to watch it unattended. That said, there are plenty of shows that appeal to adults and kids alike. Series such as Dragons: Race to the Edge, Batman: The Animated Series and Gravity Falls all hold plenty of fun for the whole family. And it’s time to embrace that fun wholeheartedly as we navigate future pandemic unknowns.