The Falcon and the Winter Soldier: Everything You Need to Know About These Marvel Characters Before Watching 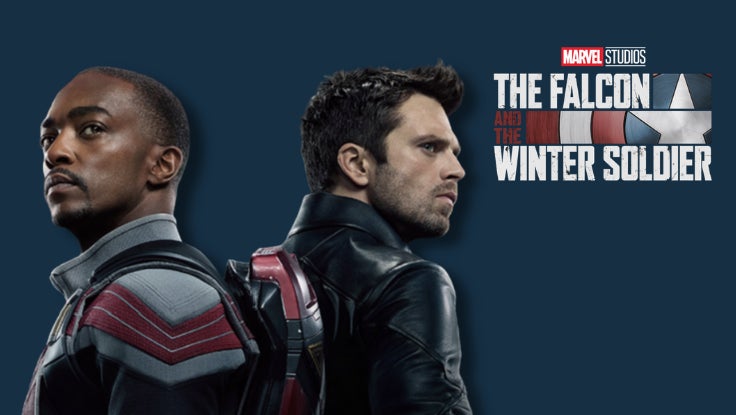 Fresh off of the Marvel Cinematic Universe’s (MCU) first foray into live-action television, many of us are still mulling over WandaVision and the Scarlet Witch (Elizabeth Olsen). And, of course, many more of us are still singing along to "Agatha All Along," the unexpected earworm that topped the iTunes charts and made a splash on TikTok. But, just weeks after the WandaVision finale, Marvel’s second live-action TV endeavor, The Falcon and the Winter Soldier, is landing on Disney Plus.

Starring Anthony Mackie as Sam Wilson/Falcon and Sebastian Stan as Bucky Barnes/Winter Soldier, the six-part miniseries is sure to fill that Marvel-shaped void in your life. Without a doubt, highly rated shows like WandaVision and The Mandalorian, a Star Wars tie-in, are the reasons to subscribe to Disney Plus. The only problem? For newbies, jumping into these storied franchises can be intimidating.

In the case of the MCU, there are a whopping 23 released movies in its repertoire (plus WandaVision), which might be too much to marathon for casual viewers. So, whether you’re looking to get caught up enough to enjoy what’s sure to be TV’s next big hit or you’re a fan in need of a refresher, we’re diving into everything you need to know about Sam, Bucky and the Avengers. Needless to say, spoilers ahead!

Captain America: The First Avenger Introduces Us to Bucky Barnes

Starting this need-to-know refresher with Bucky Barnes — later known as the Winter Soldier — only makes sense. After all, his on-screen debut was in Captain America: The First Avenger (2011), which, chronologically speaking, is a great entry point for any MCU newcomer. Set against the backdrop of World War II, the superhero flick centers on Steve Rogers’ (Chris Evans) origin story, wherein he’s transformed into super-soldier Captain America and tasked with thwarting the Red Skull’s (Hugo Weaving) plans for domination. (These plans involve the Tesseract, a pretty important object in the MCU — more on that later.) 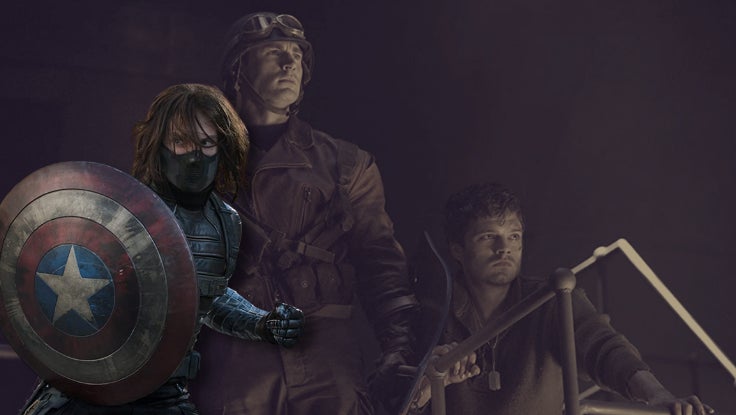 Steve’s lifelong best buddy happens to be Sergeant James "Bucky" Barnes. Prior to Steve’s transformation into Captain America, Bucky was always around to look out for him. When Steve passionately tells Bucky about his desire to join the war effort, despite being rejected by enlisters, it’s that conversation that inadvertently opens the door to being a test subject (and, later, becoming the iconic super soldier). Later on in the film, Steve recruits a team of soldiers, including Bucky, to help him attack known Hydra bases — Hydra being a fictional division of Nazi terrorists helmed by Red Skull. While on a mission to capture Dr. Arnim Zola, a Hydra biochemist looking to unlock the Tesseract’s powers, Bucky falls from a train to his apparent death.

Of course, like in comic books, on-screen MCU deaths aren’t always what they seem. At the end of The First Avenger, Captain America seems to die heroically, too. But, in the post-credits scene, he wakes up in present-day New York City where Nick Fury (Samuel L. Jackson), head of the counter-terrorism agency S.H.I.E.L.D., tells Steve he’s been "asleep" for 70 years. This, of course, leads into the 2012 Avengers film. But we don’t see Bucky again on-screen until 2014’s Captain America: The Winter Soldier. Coincidentally, this is also where we first meet Sam Wilson.

The Falcon Meets Captain America and the Winter Soldier

Following the events of Avengers (and a near-cataclysmic battle in New York), Captain America: The Winter Soldier sees Steve Rogers trying to adjust to present-day life. Well, at least when he’s not helping S.H.I.E.L.D. and Black Widow (Scarlett Johansson) save the day. However, nothing’s as it seems: There’s a strange conspiracy taking place within S.H.I.E.L.D. — and Nick Fury is ambushed by a mysterious assassin known as the Winter Soldier. 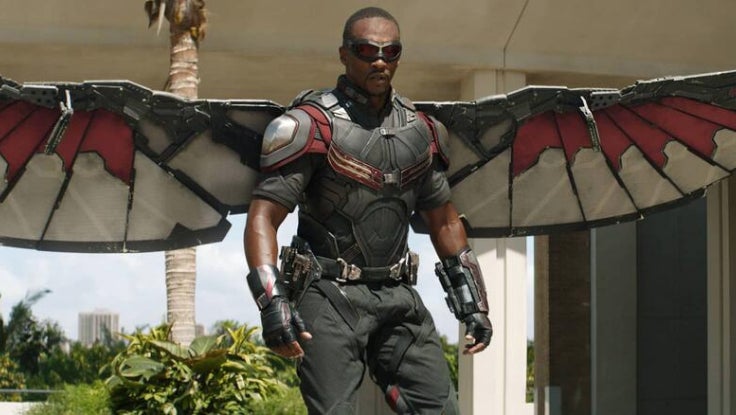 When Fury tells Captain America that S.H.I.E.L.D. is compromised, the superhero teams up with Black Widow and his new buddy, former USAF pararescueman Sam Wilson. To keep things sort of succinct, Steve uncovers a top-secret S.H.I.E.L.D. bunker. Inside, a supercomputer, which contains the consciousness of Dr. Zola, explains that the neo-Nazi organization Hydra has been slowly infiltrating S.H.I.E.L.D. since the end of World War II, with the aim of stripping humanity of their freedom in exchange for "security." Part of that villainous plan involves an algorithm capable of identifying individuals that are threats to Hydra so that they can be disposed of via satellite-guided guns.

To make matters worse, Steve recognizes the Winter Soldier. Evidently, his childhood pal, Bucky, didn’t die back in the ‘40s. Instead, he was experimented on and turned into a brainwashed assassin and sharpshooter with a superpowered arm. Sam, Steve’s new best bud, may not have superpowers, but he does have the latest tech: a "Falcon" wingpack — a jetpack with articulated wings. The duo attempt to get through to Bucky, all while thwarting Hydra’s plan. In the aftermath of their battle (and action-packed heart-to-heart), Bucky pulls Steve from the Potomac River — and then vanishes.

At the end of Winter Soldier, Sam vows to help Steve find Bucky. Of course, the duo are waylaid by some Avengers duties in 2015’s Age of Ultron, but things come back together by the 2016 film, Captain America: Civil War. In the film, Tony Stark, a.k.a. Iron Man (Robert Downey Jr.), and Captain America disagree over the need for international oversight of the Avengers.

Meanwhile, Bucky, who can still be triggered into Winter Soldier mode by a key phrase, reappears on scene. He tells Steve about other "Winter Soldiers" being kept in stasis at a Hydra base. Instead of waiting around, Captain America "goes rogue" to take care of the problem, and several Avengers (and would-be Avengers), like Sam and Bucky, join him. When team Iron Man catches wind of this renegade effort, a battle between the Avengers ensues.

Picking Up the Shield Post-Avengers

At the end of Civil War, Bucky takes refuge in Wakanda, the home of King T’Challa, a.k.a. Black Panther (Chadwick Boseman). Several Marvel movies later, we arrive at the two-part conclusion to the Avengers saga — 2018’s Infinity War and 2019’s Endgame. The basic premise here is that all of Marvel’s finest team up to stop Thanos (Josh Brolin), a superhuman Eternal of Titan who’s bent on collecting the six all-powerful Infinity Stones. If assembled into a special gauntlet, the stones grant the user the power to do, well, anything. And Thanos’ goal is to bring about balance by killing half of all life in the universe. 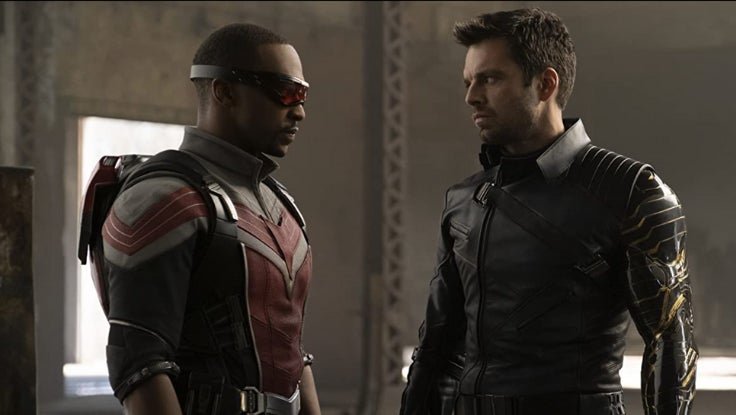 Cleverly, most of the Infinity Stones crop up in prior MCU entries. For example, the Tesseract is the Space stone. (The others are Mind, Reality, Power, Time and Soul — huge abstractions with even bigger implications.) Captain America, Falcon and Black Widow have been living the vigilante life but come back into the Avengers fold to fight Thanos. At said battle, Steve reunites with Bucky, but it’s short-lived. Thanos collects the stones, snaps his fingers and fulfills his quest. Half of all life vanishes, which means that some of our heroes disappear, too — including both Bucky and Sam.

In the final Avengers film, Endgame, the remaining superheroes pull off a "time heist" in an attempt to thwart Thanos and restore those they’ve lost. In the end, the disappeared heroes return, making for an epic final fight. In the aftermath, Captain America takes up one last mission: to return the Infinity Stones to the places in time from which the Avengers borrowed them — otherwise, time will get messy. After saying a meaningful goodbye to Bucky and Sam, Steve goes back in time, but he doesn’t come right back — at least, not the way Sam thought he would.

Bucky spots an older man sitting on a bench at a nearby pond, recognizing him as Steve even from afar. Sam approaches Steve, who, after returning the stones, clearly stayed back in the ‘40s to live the full life he’d always wanted. Although Sam’s happy for Steve, he remarks that he’s bummed at the prospect of having to live in a world without Captain America. Steve pulls out his iconic Cap shield and tells Sam to try it on. When asked how it feels, Sam replies, "Like it’s someone else’s." When Steve assures him it isn’t, Sam vows to do his best to carry on the Captain America legacy. "That’s why it’s yours," Steve says.

For years, fans had speculated that either Sam or Bucky would take up the Captain America mantle after Steve, as is the case in the comics. And that’s part of the reason why The Falcon and the Winter Soldier is so highly anticipated. Like WandaVision, the miniseries will allow creators to dig deeper into the stories of characters who might not have gotten their dues in the rather crowded (and Iron Man- and Cap-centric) MCU films. 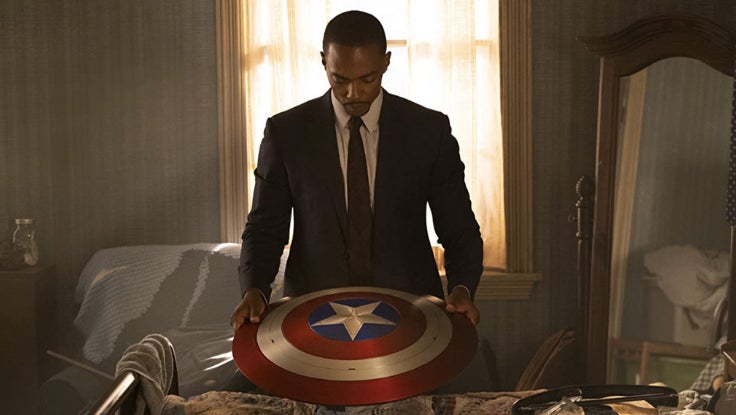 The official, and somewhat vague, logline for the new show notes that Sam and Bucky will "team up in a global adventure that tests their abilities — and their patience." And if The Falcon and the Winter Soldier is as top-notch as WandaVision, waiting week-to-week for a new episode will have us testing our patience too.