Ask Answers: What Is NBCUniversal’s Peacock — and Why Should You Add Another Streaming Service to Your Rotation?
2

From a PR Firm to a Peabody Award: The Rise of Acclaimed Director Ava DuVernay
4 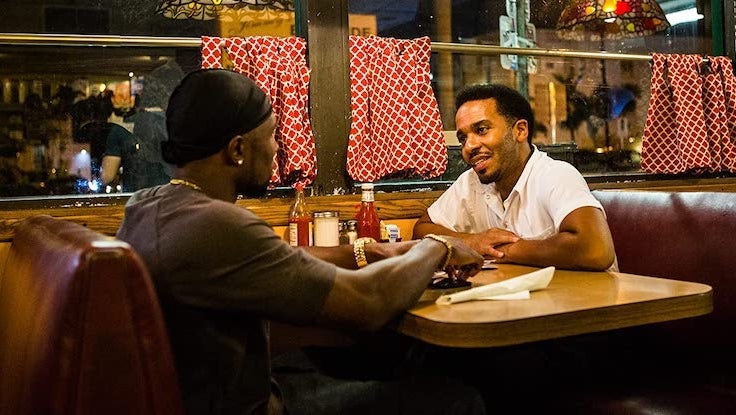 The coronavirus pandemic may have changed how we’re celebrating Pride Month this year. Many annual festivals and parades face cancellations or have been converted into virtual events that’ll allow us to continue to safely shelter in place while participating in a modified way. But even though options are more limited and you may not be able to attend public events, you can still celebrate — from the comfort of home.

One way to safely observe this annual tradition is by holding your own Pride film fest. If you're considering breaking out the popcorn and cocktails while putting your couch to good use, we've got some suggestions about what to watch.

When The Rocky Horror Picture Show was released in 1975, it wasn’t a critical or commercial success, but it rightfully became a cult classic and is still consistently hailed as a milestone in queer cinema. Campily blending comedy and horror, this musical tells the story of a young couple whose car breaks down outside a castle — which they enter to get help, only to find themselves swept up in an "annual Transylvanian convention" packed with unique attendees celebrating their sexual freedom (and a Frankenstein-esque creation with the chiseled physique of a Greek god). 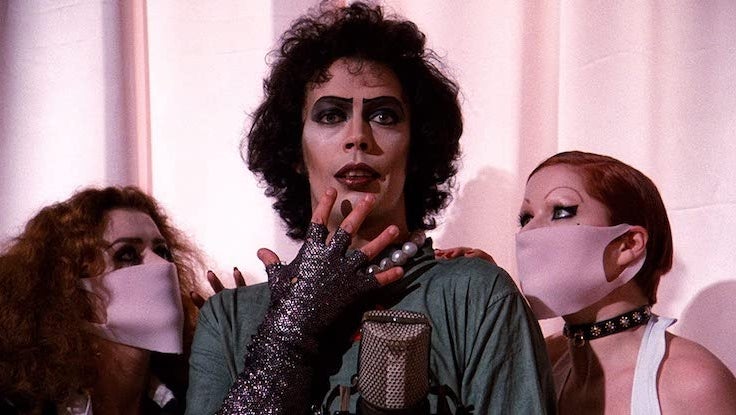 While The Rocky Horror Picture Show does center a gender-nonconforming character and dips a toe into representations of same-sex romantic encounters, where it really shines is in its message of inclusion. As writer and critic Matt Baume puts it, "Rocky Horror is a movie by, for and about people who feel like aliens and outsiders. And the movie says to them, ‘Don’t worry — you’re not alone." And that solidarity is what Pride is all about.

Shot on a single day across the United States by more than 25 different cameramen, Gay USA is a documentary that captures an openly joyful and inspiring celebration of Pride and the hard-fought battles that preceded this public expression. Featuring footage shot at a number of marches and events that took place on Gay Freedom Day in 1977, this movie stands as a comprehensive snapshot of LGBTQ+ communities during a time when efforts to bring visibility to the Gay Rights Movement were coalescing in an unprecedented way. Gay USA displays the defiant optimism that propelled the movement and groups that were constantly under attack, chronicling history as it was being made. 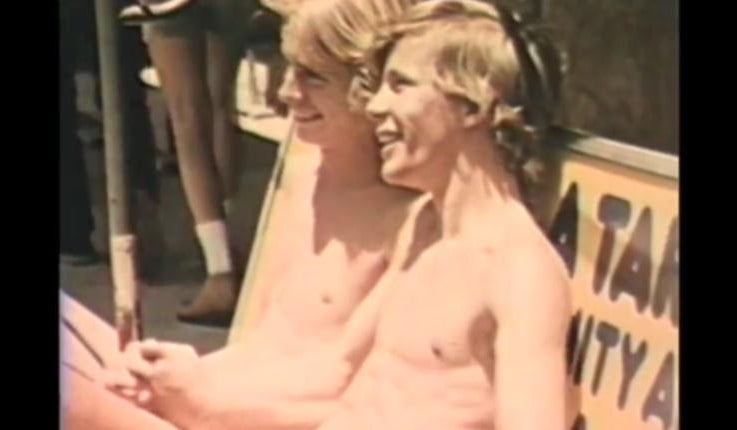 While its nostalgia alone makes for a fantastic addition to any Pride Month film fest, Gay USA is valuable today not only for highlighting a transformative era in history but also for the message of hope it still carries for viewers. It’s a film about triumph and celebration, a humanity-affirming journey that takes us back while energizing us to move forward.

For a time, drag ball culture and its voguing scene were little known to most people — but for those who participated, they were indispensable. This documentary by Jennie Livingston follows the New York City subculture’s heyday over seven years in the mid- to late-1980s, condensing them into a film that illuminates the elaborate structures of balls and the glamorous competitions they involved while interviewing both prominent and unknown members of the scene. 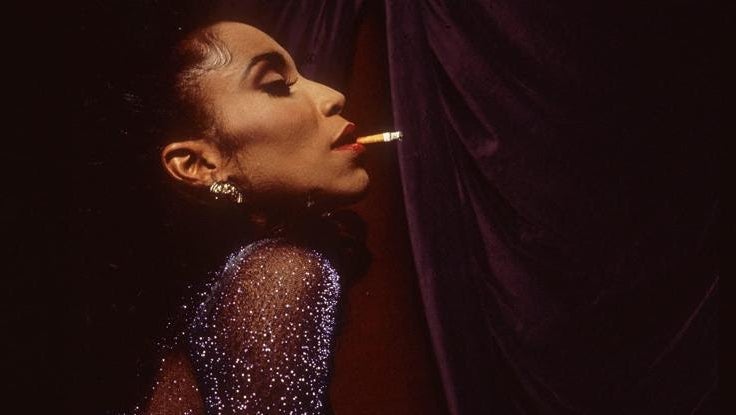 Paris Is Burning’s colorful footage of costumed contestants walking the runway is captivating, but the candid interviews with Black and Hispanic gay men, transwomen and drag queens are what make this film a must-see. Addressing everything from gender roles and racism to experiences of homelessness and violent homophobia, the monologues provide incredible context not just for NYC’s ballroom culture but also for what it meant to be living as a queer person of color in the face of the AIDS epidemic, familial estrangement and poverty. Paris Is Burning is fun at times, sure, but it’s a film about discovering strength — about surviving, finding the safety of chosen families and navigating the complexities of uncovering and expressing identity.

Gay conversion camps, homophobic parents and forced compliance with "traditional" gender roles are oppressive and unpleasant, to say the least. But when they’re satirized against a backdrop of cartoonish Barbie Dream House hues and when one of the parents is John Waters-film alum Mink Stole, they become vehicles for showing how camp and humor can be excellent coping tools. 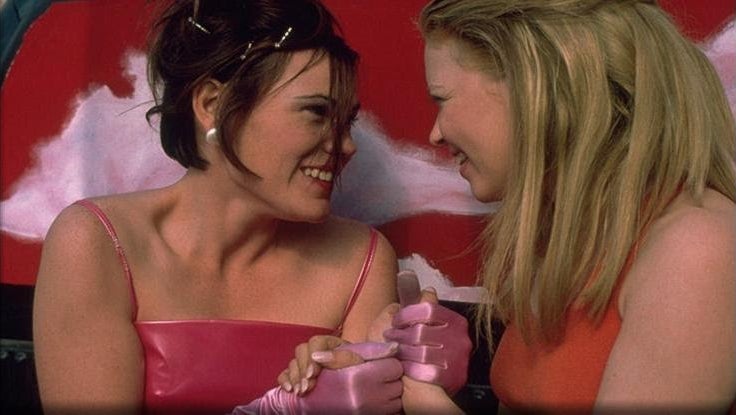 But I’m a Cheerleader tells the story of Megan, a high schooler who’s sent to a conversion therapy camp when her parents and friends begin suspecting she’s a lesbian. While there, Megan and the other campers are forced to perform stereotypically gendered tasks in an effort to "cure" themselves of their homosexuality. The film lampoons the senselessness of stereotypes (like Megan’s vegetarianism and interest in Melissa Etheridge meaning to her family that she’s a lesbian), presenting them so one-dimensionally that their ridiculousness is totally apparent. They’re something to finally laugh at as we revel in the romance between Megan and fellow camper Graham and the ultimate conversion: Megan’s parents showing support for their daughter’s sexuality.

Nico and Dani follows a 10-day span in the lives of the titular characters — two Spanish teenagers — as they settle into a casual summer vacation at a beach resort. But what the best friends anticipate to be a relaxing holiday turns into a series of revelations about their sexuality as Dani realizes he’s gay and has deep feelings for Nico, who wants to spend his time pursuing girls. 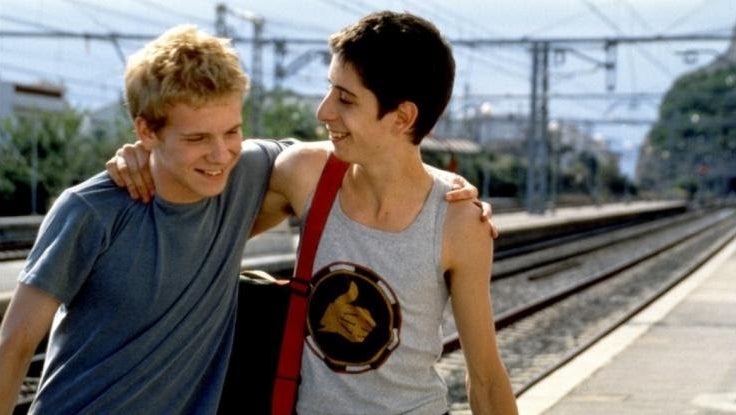 Heartfelt and languidly paced, the film tells a coming-of-age story with the dignity and maturity it deserves instead of devolving into the raunchiness that’s so common in American movies about teens. But it also takes teenage uncertainty and questioning to a higher level by chronicling the ways people who are in the midst of discovering their sexuality can find it to be confusing, heartbreaking and wonderful. Better yet, the film non-judgmentally models what it’s like to become more aware of who we are, sexually and otherwise, and how friendships change as we grow up.

Activist and politician Harvey Milk was the first openly gay person to be elected to public office in California (and one of the first in the entire United States), winning a seat on the San Francisco Board of Supervisors in the late 1970s. He made history and left an enduring legacy by helping to pass the first gay rights ordinance in the country, fighting against gentrification and displacement, and inspiring future generations of LGBTQ+ Americans to enter the political arena. 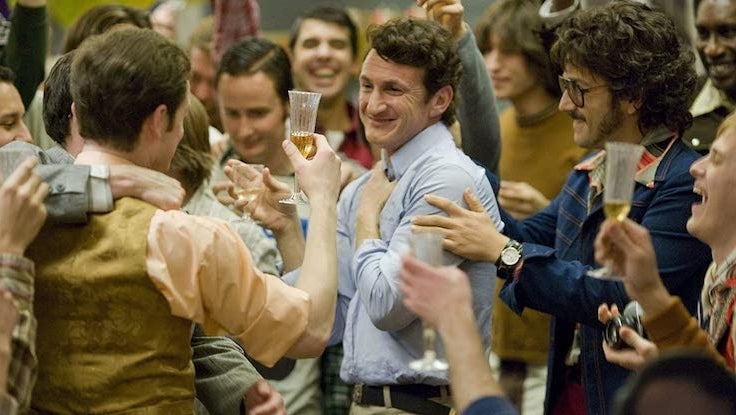 Milk is a biopic that charts its namesake’s rise to victory while highlighting his tireless dedication to securing rights for LGBTQ+ populations in San Francisco. It’s an essential and "fascinating, multi-layered history lesson" that is "richly flavored with anecdotal incidents and details…[and] inspires a sense of intimacy with its subjects." Like many milestones in history, Harvey Milk’s election and pioneering efforts can still infuse us with hope today, and watching Milk offers a first class ticket to that legacy.

Carol is "decidedly not a love story that just so happens to be about two women. That they are both women, and that it is the 1950s, is as central to what happens to them as between them," writes Gabrielle Korn for Nylon. These two women — Carol and Therese — meet by chance at the department store where Therese works. Romance blossoms between them surreptitiously, as life in 1952 and Carol’s custody battle for her daughter demanded. 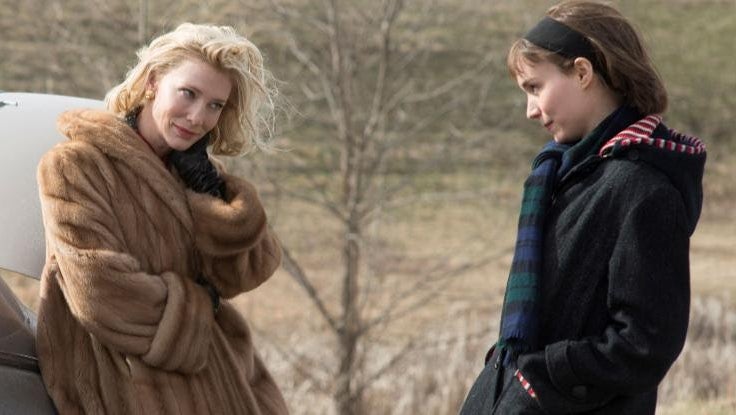 Based on Patricia Highsmith’s novel The Price of Salt, which is a lesbian love story that’s lauded for having a happy ending in a genre where happy endings are notoriously absent, Carol follows the novel’s lead and gives us that same fulfillment — the satisfaction of seeing the pair finally end up together after so many twists and so much secrecy conspired to keep them apart. It’s an ode to intoxicating love and one that the British Film Institute named "the best LGBTQ+ film of all time," an achievement that’s pretty remarkable in itself. Slot this one into your film fest lineup, pronto.

Moonlight follows Chiron through three stages of his life — childhood, adolescence, adulthood — and through the hardships he faces growing up in his Miami neighborhood — abuse, bullying, exposure to drug addiction. These elements shape his identity, but so do being gay and being Black, and we’re gifted a front row seat as Chiron navigates the murky waters of realizing who he is and the role his past played in shaping him. 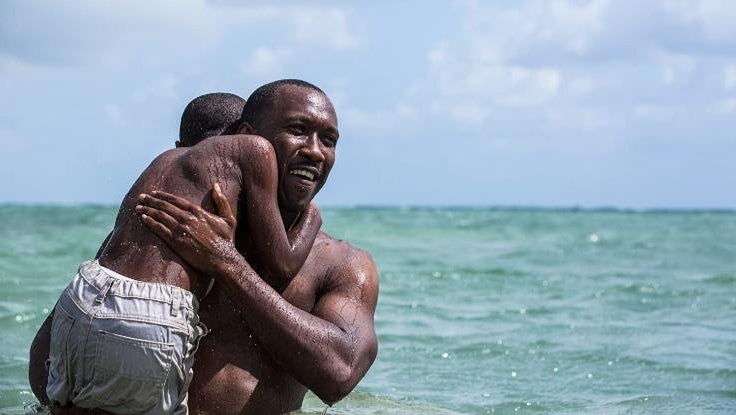 Chiron’s complexities alone bring an extraordinary level of depth to this film, but the world (and even Pride) will always benefit from more representations of queer people of color and Black boyhood. And when they’re done as beautifully and with as much wisdom as Moonlight is, the result is truly and literally unforgettable. Your Pride film fest (and your life) will be better for having seen this movie.

Pride as we know it wouldn’t exist without Marsha P. Johnson, the trans activist and icon who led patrons at the Stonewall Inn to resist police antagonization and fight back during the famous riot that erupted on June 28, 1969. This frontline participation is one of the more widely known elements of Johnson’s life, but we owe it to her (and ourselves) to learn more about her story, especially her work to bring visibility and resources to her community. That’s where The Death and Life of Marsha P. Johnson comes in. 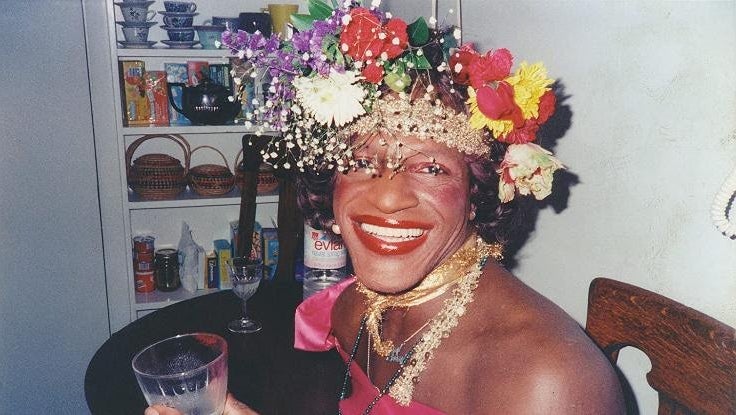 While the film addresses the mystery and tragedy surrounding her untimely death, it’s particularly valuable for its discussion of her life in the aftermath of Stonewall. It showcases Johnson’s work fighting to help trans people obtain access to housing and mental health care and fighting to advocate for trans women of color — a population that’s historically faced extensive erasure and direct cruelty at the hands of governments and police while receiving little justice. Her story is a reminder that what she worked for and fought against is still a harrowing reality for many people. And The Death and Life of Marsha P. Johnson is a compelling call to action to carry her (still very necessary) political energy into the future.

Told as a flashback, Portrait of a Lady on Fire follows Marianne, an artist who travels to western France in the late 1700s to paint a portrait of Héloïse, a woman who’s set to marry an Italian man. But Héloïse doesn’t want to get married, and as the two grow closer under Marianne’s guise of accompanying Héloïse everywhere to study her features for the portrait, they fall in love. Although their incandescent romance is cut short and the women are forced to separate, Portrait of a Lady on Fire brilliantly captures the magic of falling in love — and the longing melancholy that haunts us when we can’t be with the people we deeply desire. 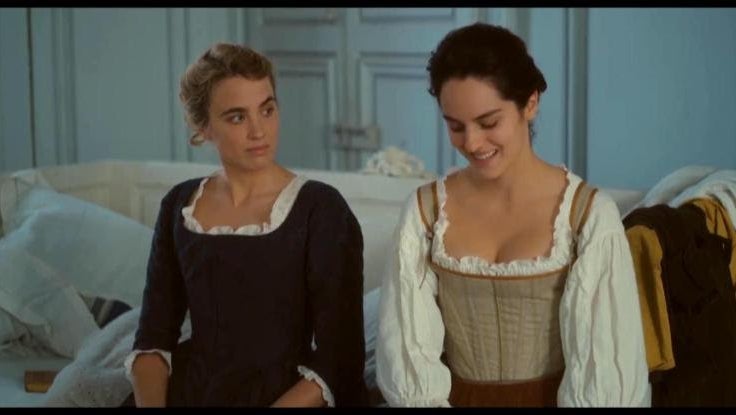 The cinematography is beautiful enough to make this a must-see, but the fact that this movie centers a lesbian romance certainly makes it more than worth watching in celebration of Pride. It "understands queer desire" and "get[s] intimacy between women right," notes Ren Jender of The New York Times, but it’s also a luminous love story on its own, one that "sets a highest standard for any romance that will come after it."

Ask Answers: What Is “MasterClass” and Why Is It the Perfect Quarantine Rabbit Hole?