Several titles got me through 2020’s many challenging months of isolation. Hulu’s limited series Normal People. Chloé Zhao’s film Nomadland. All the outfits in Mrs. America and The Queen’s Gambit also helped. As did the very unexpected twists and turns in Kaley Cuoco’s The Flight Attendant. Plus Dan Levy’s sweaters in Schitt’s Creek, of course.

But what about 2021? Fortunately, it doesn’t look like we’ll run out of new movies and TV releases soon. HBO announced new seasons for its shows Insecure and Succession coming in 2021, as well as the release of the Game of Thrones prequel House of the Dragon in 2022. Disney Plus has a long list of new programming slated for this year for fans of the Star Wars and Marvel universes. We’ll finally see Keanu Reeves and Carrie-Anne Moss in The Matrix 4. And Netflix has just promised we’ll be able to watch "new movies, every week, all year."

Some of 2021’s new titles will be films that were ready and had their release dates postponed due to the pandemic, like A Quiet Place II, No Time to Die and Black Widow. But a lot of the content we’ll be enjoying is just plain brand new, meaning it’s been produced and shot during pandemic times. Here’s how that’s even been possible.

Back in June of 2020, Hollywood’s big unions released a report titled "The Safe Way Forward" that outlined extensive safety guidelines on how cast and crew members could go back to work. It created a "zone system" that mandated everyone working in a production be tested within the last 24 hours before entering the so-called Zone A — the area of a production that includes the performers, who during filming can’t use PPE or follow physical distancing requirements. A production’s Zone A also consists of those who are in direct contact with the actors, like the director, camera operators or makeup and hair artists. They all are tested for COVID-19 at least three times a week. 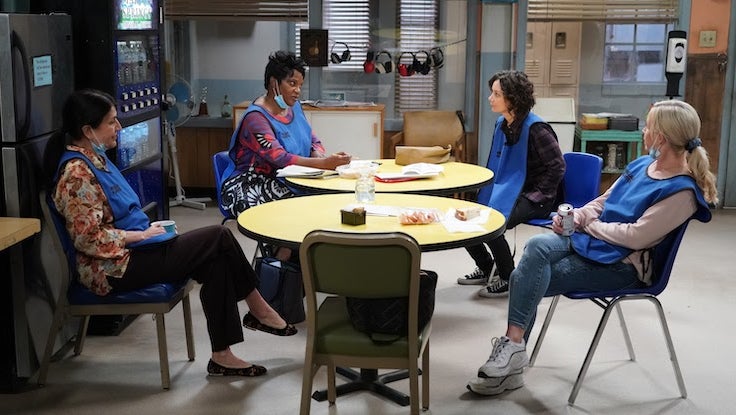 "Zone B is everywhere the production has a footprint that is not Zone A. Use of PPE and stringent physical distancing practices are observed and enforced within Zone B," the report adds. Those in Zone B are tested at least once a week.

Both the Directors Guild of America (DGA) and SAG-AFTRA, the actors union, agreed to these safety guidelines for their members. This allowed them to slowly restart production in the United States.

The Writers Guild of America (WGA), in turn, has published best practices for Zoom Writer’s Rooms, meaning the new seasons of most of your favorite TV shows have been written in virtual settings. The WGA guidelines specify studios should reimburse writers for expenses like monitors or ergonomic chairs and advise on scheduling 10-minute breaks during room hours. They also recommend the use of software — like WritersRoom Pro or Miro — that allows screenwriters to mimic the use of a whiteboard, the place where they would normally jot down details about character or plot development before putting them on the page.

Writers haven’t been immune to the pandemic, however, and some TV shows have even incorporated COVID-19 plots into their storylines to reflect the reality we’ve been facing for the last year. Grey’s Anatomy, The Conners, Black-ish and a special episode of Mythic Quest: Raven Banquet have all found ways to reflect the real-life crisis through their characters.

And of course, shooting didn’t only restart in the United States. Netflix announced in June that some of its roster of Spanish TV shows was resuming production, among them the Stephen King favorite Money Heist (La casa de papel), which also happens to be Netflix’s most-watched non-English show. One of the show’s directors, Koldo Serra, posted to his Instagram account on August 17, 2020, from the new normality of shooting in times when masks are a necessity. 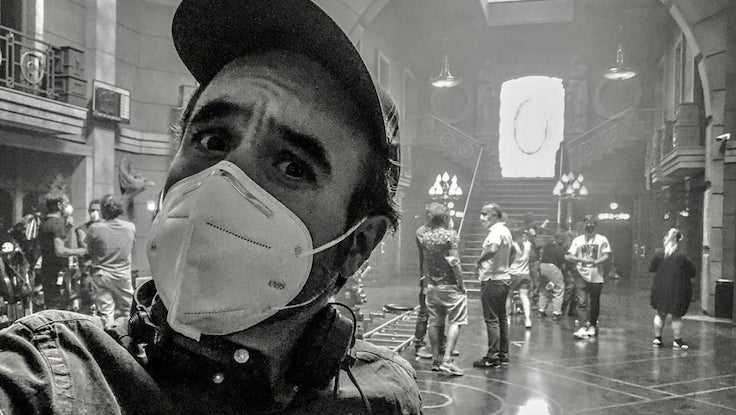 Jurassic World: Dominion resumed production in July in London after commissioning a private medical facility to manage the production. All crew members were tested before and throughout production. Management also limited the number of people allowed in the different spaces across Pinewood Studios where the film was shot, made sure to install more sinks, distributed hand sanitizer and reminded the crew of the need to respect the "6 feet of separation" rule.

Also during the summer and fall, the Avatar sequels went back to filming in New Zealand and Marvel’s Shang-Chi restarted (and wrapped up) shooting in Australia, where cases have remained lower. "The cool thing about it, I think, also, is that it's not so much everyone policing each other. It's a lot of self-policing, which is like, ‘I want to make sure that I'm not doing anything to put my crewmembers, my castmates, in danger," Shang-Chi actress Awkwafina told The Hollywood Reporter about the experience of shooting in this situation.

Guillermo del Toro’s star-packed Nightmare Alley picked up production in September in Vancouver, after having halted in March of 2020. "It is not easy," said the Mexican filmmaker during a virtual panel this summer. "Basically you’re operating a large surgical theater. You have to be sterile, have everybody in conditions that are almost clinical. But at the same time, you have to reenact a carnival."

Del Toro also explained how difficult it was to coordinate and reschedule his cast for the second portion of the shoot. "The blessing of having this cast is amazing, but the difficulties of rescheduling with all this are enormous because everybody is on demand." Bradley Cooper, Cate Blanchett, Rooney Mara, Toni Collette and Willem Dafoe are a few of the big names appearing in Nightmare Alley.

Netflix has just announced a slate of 70 movies to be released in 2021, with Gal Gadot and The Rock’s Red Notice and Leonardo DiCaprio and Jennifer Lawrence’s Don’t Look Up, among them. How is the streaming giant churning out all that new content? 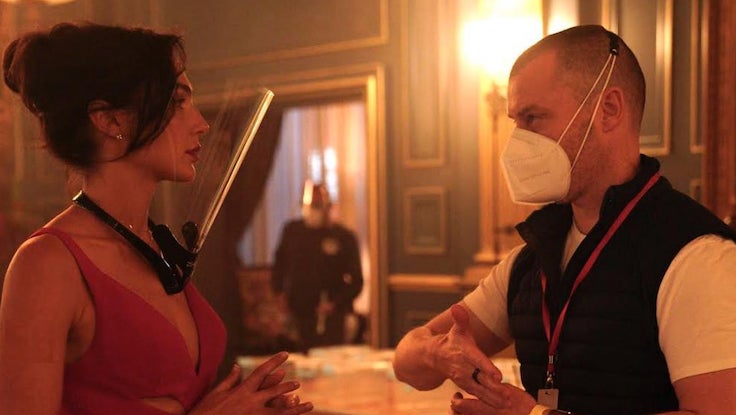 Zendaya’s new movie Malcolm & Marie made headlines back in July for being among the first productions in the United States to take place after the initial COVID-19 lockdown. Netflix snagged its worldwide rights in September. The movie, which will be released February 5, 2021, also stars John David Washington (Tenet) and was shot during a two-week period in the Caterpillar House in Carmel, California. The cast and crew, which was a very small team, took several tests during production and quarantined for two weeks before filming began, among other safety precautions.

Netflix also seems to have perfected the formula of shooting under these particular circumstances. In a recent interview, the company’s vice president of physical production for original series, Momita Sengupta, shed a bit more light on the system. Netflix being Netflix, the streamer uses a tool called the Barnes Scale, which was developed by one of the company’s data scientists. The scale allows the company to model what the conditions might be on any particular set, taking into account information like community prevalence of the virus. That helps them decide what safety strategies to put in place.

"One of the strategies — and film has used this very successfully — is we go, ‘OK, looking at this model, I think we should bubble the cast and crew.’ And that’s what led to a full bubble on Red Notice in Atlanta, which has its challenges. And then on two other movies, Hustle and Don’t Look Up, there is more of a hybrid bubble, which is just the cast and some key crewmembers. We’re focusing on the cast because they are the ones that don’t wear the masks and are the most vulnerable," Sengupta said.

The Show Must Go On

The DGA told its members at the beginning of 2021 that COVID-19 protocols had been "largely effective in catching infected individuals before they are contagious, and limiting the potential spread on set." The good news is the system seems to be working. And it looks like we’ll keep seeing candid pictures, like Chris Evans administering his own COVID-19 test on the Boston set of Don’t Look Up or Hailee Steinfeld and Jeremy Renner surrounded by masked and face-shielded members of the crew on the New York set of Hawkeye. 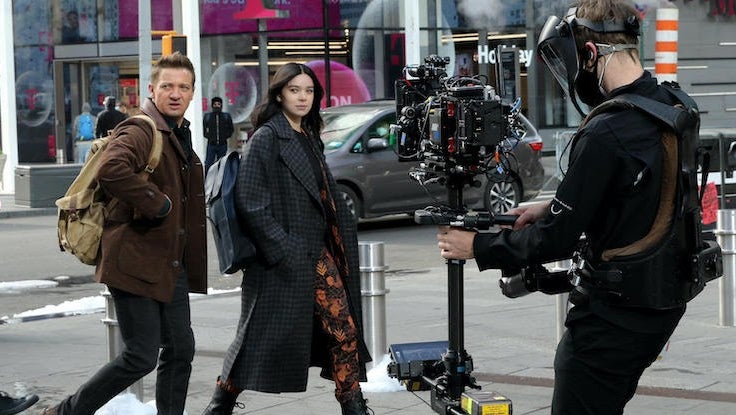 Plus, the list of new titles being made goes on. The Hollywood Reporter published a report of all the movies being shot by major film studios during the pandemic in 2020. It listed the number of productions at more than 73 — and that number only accounted for movies.

But even if Hollywood has perfected the art of filming under "new normal" circumstances, shooting a show or a movie in times like these still sounds intimidating and incredibly complicated. It’s no wonder Tom Cruise got a bit angry on the set of Mission: Impossible 7 a few weeks ago because a couple of crew members weren’t following the social distancing guidelines.

It’s probably safe to say we’ll all need some new Hollywood escapism to get through 2021. So I’m glad Cruise — and plenty of others in the industry — are making sure the show goes on.