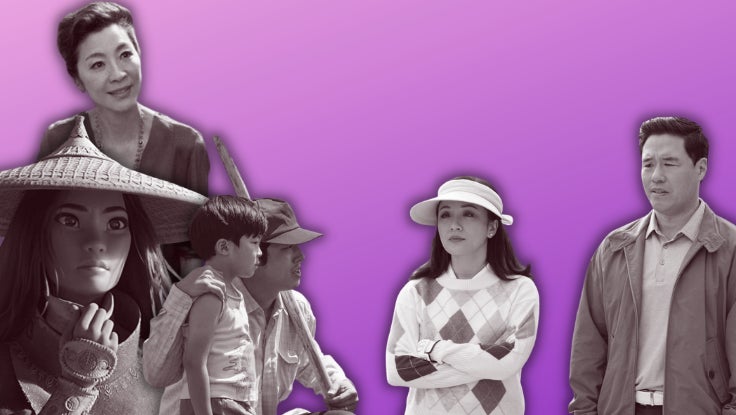 Without a doubt, representation matters. For decades, the entertainment industry has not only cast Asian American actors in offensive and stereotypical roles, but they’ve also whitewashed Asian characters, further hindering any attempt at progress in Hollywood. However, that doesn’t mean there aren’t Asian American filmmakers, actors and artists crafting incredible — and undeniably important — films and TV shows. Join us in taking a look at some of our favorite films that center Asian characters, creators and stories.

In the early 1990s, studio executives insisted that people didn't want to see a film about Chinese-American women. They were wrong. Defying the odds, The Joy Luck Club banked $33 million at the box office with an impressive critical response in 1993. 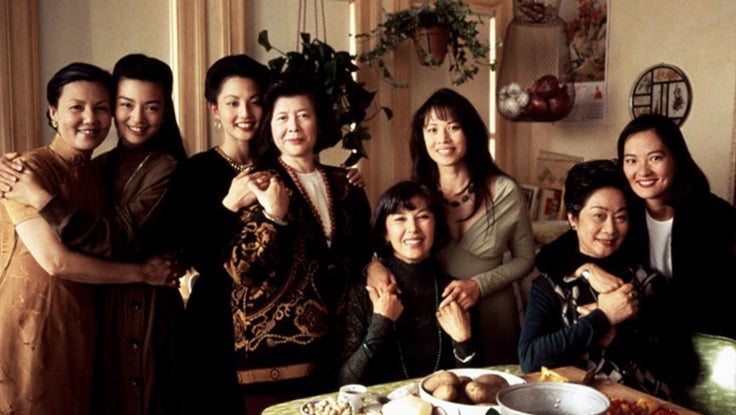 It brilliantly showcased complicated mother-daughter relationships and the sacrifices and hardships of immigrant parents. Most importantly, the tear-jerking movie is a reminder of how powerful personal stories can be.

The Joy Luck Club proved that diversity is important — and it sells at the box office. Despite this, there wasn't another major Asian-American Hollywood picture for 25 years until Crazy Rich Asians was produced.

This emotional film follows Chinese-American Billi (Awkwafina), who visits her grandmother Nai Nai in China. The problem? Everyone in the family is keeping a painful secret from the beloved matriarch — Nai Nai only has a few weeks left to live. Billi disagrees with the rest of her family, believing her grandmother should know her true fate. 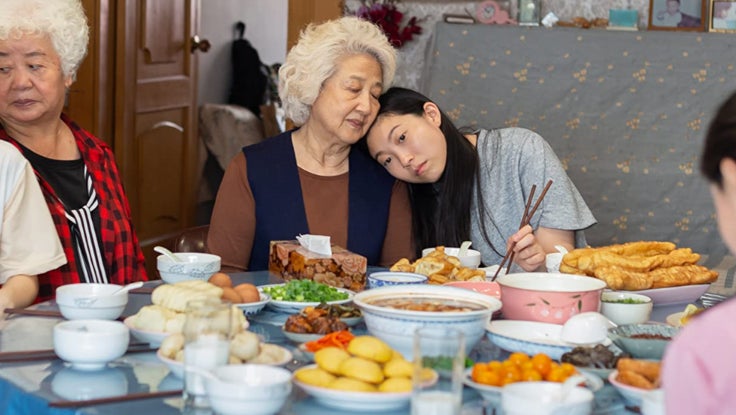 The equally heartbreaking and hilarious masterpiece captures the clashing of culture and multi-generational families. Despite dethroning Avengers: Endgame in earnings for the biggest theater average of 2019, The Farewell is more than just a successful movie. Lulu Wang, the film’s director and writer, explains, "It’s about loss, it’s about regret, it’s about guilt. It’s about gaps in communication, whether that’s geographical, or language, or cultural. It isn’t just about the way we look."

Released in theaters and on Disney+ for an additional fee this March, Raya and the Last Dragon is worth the price of admission. Beautifully animated and wonderfully acted, the film blends imagery and mythology from several Southeast Asian cultures to craft the fantasy world of Kumandra, where humans and dragons once lived together harmoniously. That is, until the Druun attacked. 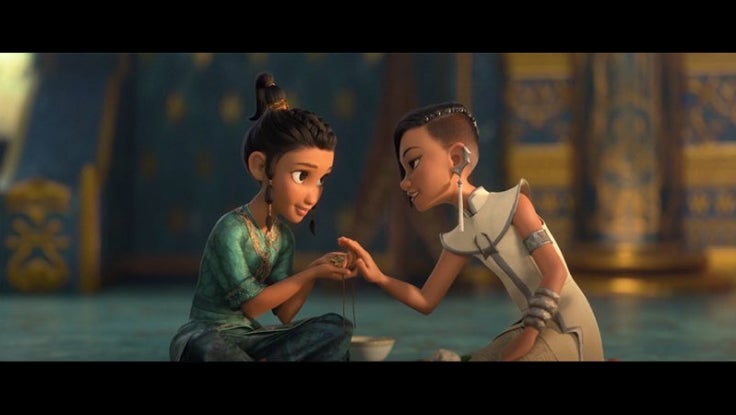 In an effort to save the land, the dragons sacrificed themselves. Fast forward 500 years: Raya (Kelly Marie Tran) and her father are tasked with guarding a relic that staves off the Druun and its plague. But when the leaders from other parts of the land clash over the relic, the Druun is released once again. Now, it’s up to Raya to track down the last dragon, Sisu (Awkwafina), all while contending with Namaari (Gemma Chan), a friend-turned-enemy from Raya’s past. Bursting with action, humor, imagination, and a lot of heart, Raya is must-watch. And although Disney hasn’t made it canon (and probably won’t given the company’s abysmal track record), Tran believes her Disney Princess is queer.

Chinese-American Wil and her traditionalist mother are both in a dilemma: They don't want to break cultural taboos. However, the two have secret love lives. Wil is a lesbian, but her unaware mother keeps setting her up with bachelors. Wil's mom also shows up to her apartment unannounced to confess that she's pregnant. Who's the father? 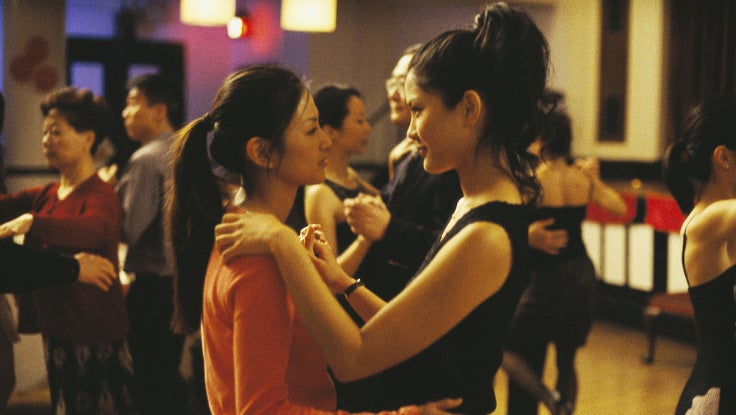 Directed by Alice Wu, Saving Face is a magical romantic comedy that highlights the journey of sexual identity and the challenges of upholding family honor. Although the film wasn't a box office hit, it influenced many Asian Pacific Americans in the entertainment industry, including Always Be My Maybe's Ali Wong.

Small and quiet but deeply heart-wrenching, Minari is one of 2020’s best films — and, without a doubt, a film that will resonate for decades to come. Written and directed by Lee Isaac Chung, the film centers on a Korean-American family who, at the behest of their patriarch (Steven Yeun), move to small-town Arkansas in search of a better life — more specifically, a life focused on farming and living off the land. 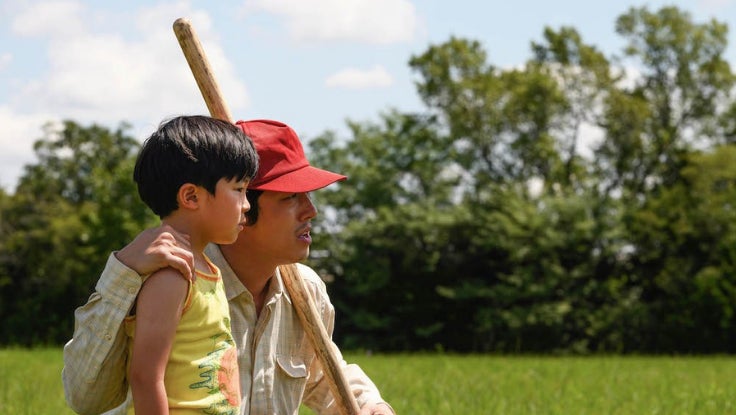 This beautiful portrait is brought to life by incredible performances from Yeun and Ye-ri Han, who capture all of the nuance of what it’s like to be a couple torn between lives, between wanting certain traditions and feeling the pressure to assimilate to American culture. Additionally, both Youn Yuh-jung, who plays the family’s "unflappable" grandmother, and young newcomer Alan S. Kim leave a lasting impression, and, between them, blooms a relationship that feels so real and textured. Matthew Dougherty of The Filtered Lens writes that, "Minari is the art of filmmaking at its most precise and efficient without forgoing the canvas quality of the frame" — and we couldn’t agree more.

The letters are out. High-school junior Lara Jean Song Covey (Lana Condor) wrote secret love letters to five boys, but now they're mysteriously in the hands of her major crushes, including her sister's boyfriend. 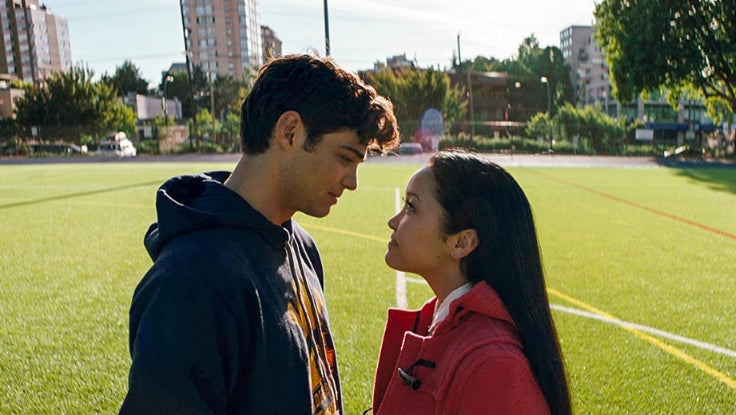 Netflix's To All the Boys I've Loved Before is a fun love story featuring an Asian-American heroine at the front and center. Many fans love that she's just an ordinary teenager who doesn't fall into any stereotyped depictions of Asian women. Plus, it's not your typical teen movie in which the female protagonist needs a makeover at the end of the story.

In 2015, Fresh Off the Boat became the country's first Asian American TV show in more than 20 years. The comedy is based on the life of New York restaurateur and media personality Eddie Huang, who struggled with his identity at home and in society. 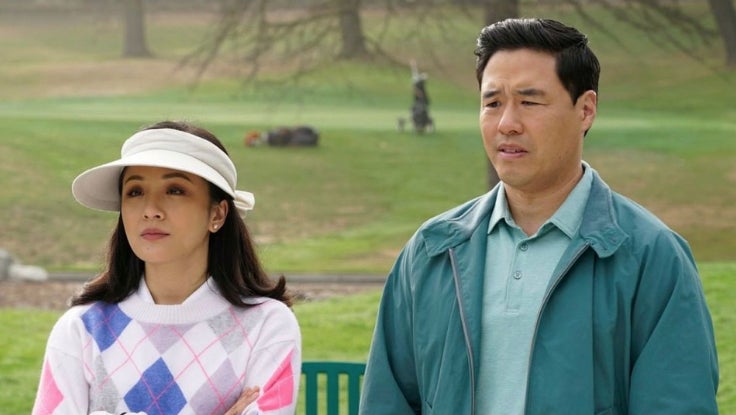 Fresh Off the Boat shares experiences that many immigrant families can relate to, such as becoming citizens, the embarrassing lunch box moment and many cultural customs. Yet, the story is told from a unique perspective — that of a charming, hip-hop- and basketball-loving 11 year old.

What happens when you put an intelligent security operative and a psychopathic assassin together? A refreshing and thrilling TV show. Killing Eve is a fierce game of cat and mouse, featuring two women (Sandra Oh and Jodie Comer) who become obsessed with each other. Who will win this twisted game? 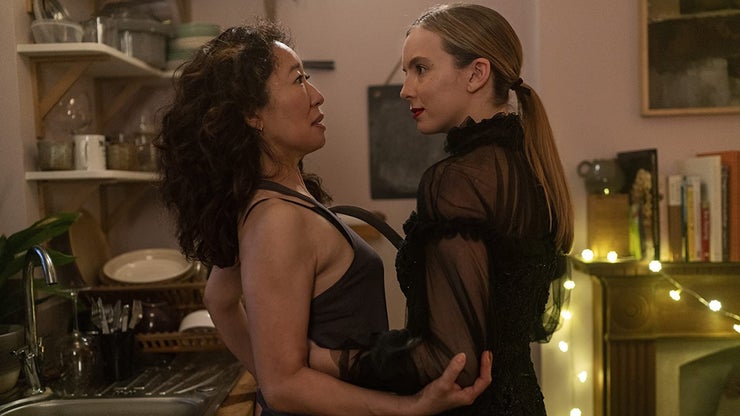 Critics have given a standing ovation to the series, while fans call it "revolutionary." Oh became the first woman of Asian descent to be nominated for the Emmy Award for Best Lead Actress for her role as Eve in 2018. At the awards show, she proudly declared, "It's an honor just to be Asian."

Based on Kevin Kwan’s bestselling novel of the same name, Crazy Rich Asians made history as Hollywood's first blockbuster rom-com in 10 years. It took the world by storm, flashing the big screen with lavish mansions, expensive cars and extravagant parties. The game-changing film also caused some ugly crying in theaters. 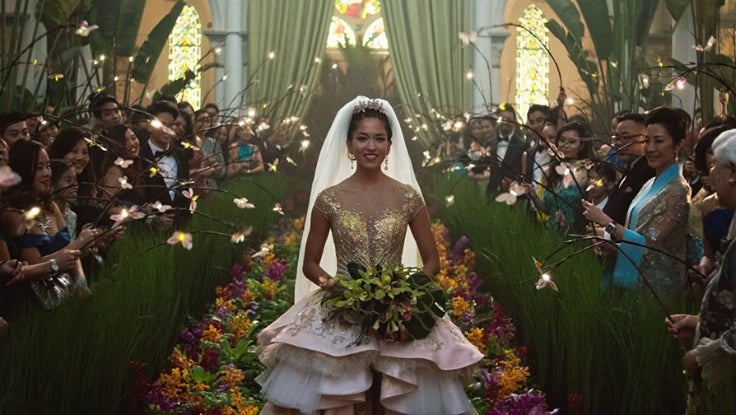 Beyond being a massive hit, Crazy Rich Asians is the first big Asian Hollywood film in 25 years. Plus, it kicked out stereotypical roles in favor of well-rounded, relatable Asian characters. The flick follows Chinese-American professor Rachel (Constance Wu) who learns that her boyfriend (Henry Golding) is the "Prince Harry of Asia."

Saving Face (2004) marked Alice Wu’s directorial debut and, honestly, a filmmaker couldn’t ask for a better first outing. Over a decade later, Wu released her sophomore feature, The Half of It, on Netflix to great acclaim. Pitched as a "different kind of love story," The Half of It is a loose retelling of the Cyrano de Bergerac story — with a queer twist. Or what Rolling Stone describes as a "quietly revolutionary achievement…brimming over with pleasures of the unexpected." 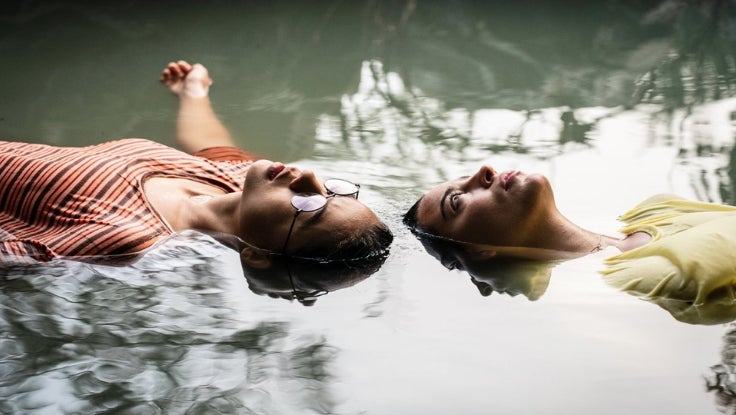 Ellie Chu (Leah Lewis) lives in the small town of Squahamish, and she spends her time writing papers for her peers in exchange for money and handling her dad’s station master and signalman duties at the town’s train stop. When she meets Paul Munsky (Daniel Diemer), a well-meaning but inarticulate jock, Ellie writes letters on Paul’s behalf to Aster Flores (Alexxis Lemire), his crush — and, as it turns out, Ellie’s crush, too. While it was marketed (in part) as a YA rom-com, the film is more longing than first romances, but it still feels refreshing. After all, as Lewis points out, "[i]t's a self-love story… [the characters] end up with something… It is a love story, it’s just not a ‘romance’ story."

Written and directed by actor Justin Chon, Gook boldly revisits the LA riots and offers a Korean-American point of view of racial tensions in 1992. After winning a film festival award, the independent movie was picked up by Samuel Goldwyn Films to be released in select theaters. However, Chon isn't in it for the money. 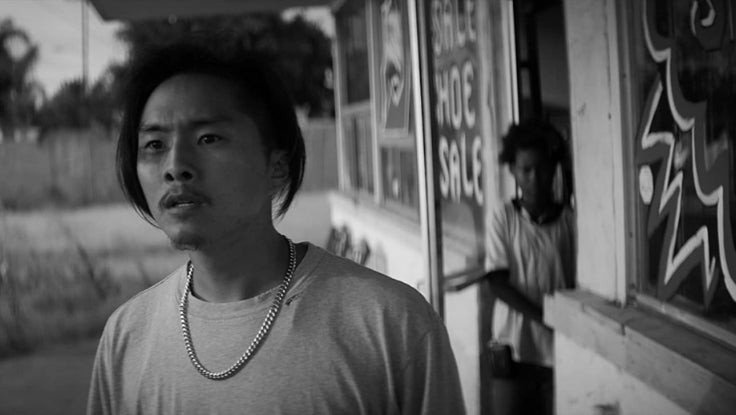 "Let’s be honest, I’m not getting rich off this film. I did this because I feel like it matters," reveals Chon. Gook centers on two Korean-American brothers (David So and Chon) who own a shop and form an unlikely friendship with an African-American girl (Simone Baker). The three must protect the store amid the intense riots while facing challenges of racism and family.

The Namesake is an adaptation of ‎Jhumpa Lahiri’s best-selling novel of the same name. This film explores the conflicts of being Indian and American as well as the power of a name. It's also about the significance of family, love and identity. 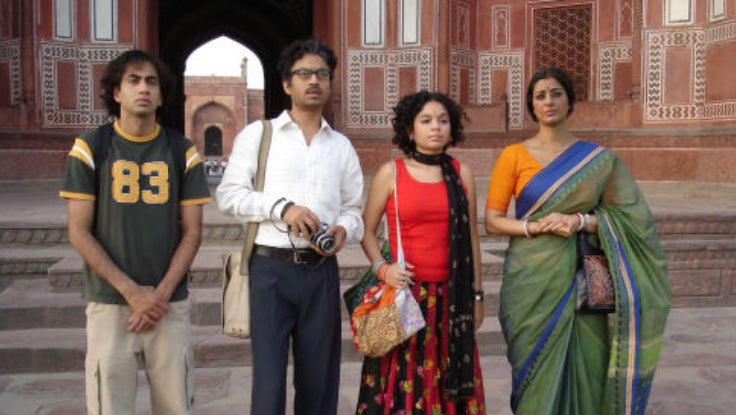 Ashoke and Ashima (Irrfan Khan and Tabu), an Indian immigrant couple, steal the spotlight at the beginning of the film. However, the story eventually shifts to their American-born son, Gogol (Kal Penn). While Gogol works hard to fit in society, his parents stick to their traditional ways.