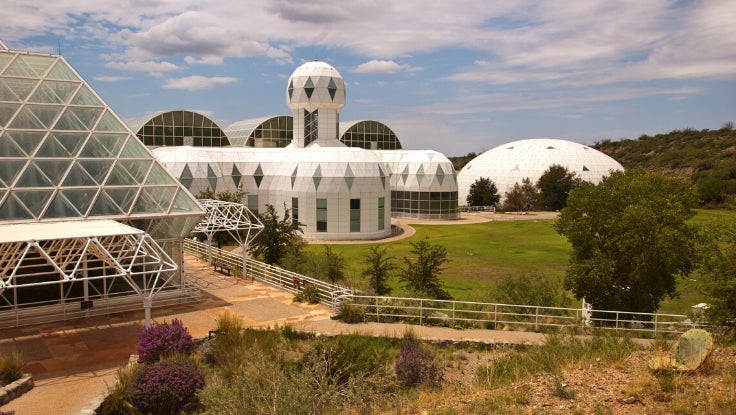 Located roughly 30 miles from Tucson, the old mining town of Oracle, Arizona, has an interesting history dating back to at least the 1870s. When gold and silver were discovered in the area, a mining community started to flourish, and a few years later, Oracle’s Acadia Ranch became a premier retreat for folks with tuberculosis. Buffalo Bill Cody, who owned the High Jinks Gold Mine for a time and dressed up as Santa Claus in 1911 to surprise the children of the town, even has ties to Oracle.

These days, it’s a bedroom community for nearby Tucson, but all that mining history aside, what really puts Oracle on the map for roadtrippers is Biosphere 2. That’s right — if you thought Nevada and New Mexico were the only states with ties to the interstellar, think again. Built between 1987 and 1991 as an Earth system science research facility, Biosphere 2 has provided researchers with a place to learn about Earth, its living systems and the planet’s place in the universe. At 3.14 acres, the structure remains the largest closed ecological system, or vivarium, ever created.

All of that is neat, but what makes it strangely connected to the events of 2020 is that one of the facility’s most notable purposes was to help determine how viable closed biospheres would be in future space colonization efforts. Of course, before the system could be taken to the "final frontier," it had to be tested, and that’s just what happened in Arizona in the 1990s.

How and Why Was Biosphere 2 Created?

If there’s a Biosphere 2, there must be a Biosphere 1, right? According to the facility’s creators, the first biosphere is Earth itself, which means the various biomes within the giant geodesic domes and pyramids are meant to replicate our planet’s ecological functions. Launched in 1984, the Biosphere 2 project was funded by businessman-turned-philanthropist Ed Bass and helmed by systems ecologist John P. Allen. The two met in the 1970s at a counterculture community called Synergia Ranch and found themselves intrigued by the "Spaceship Earth" concept. 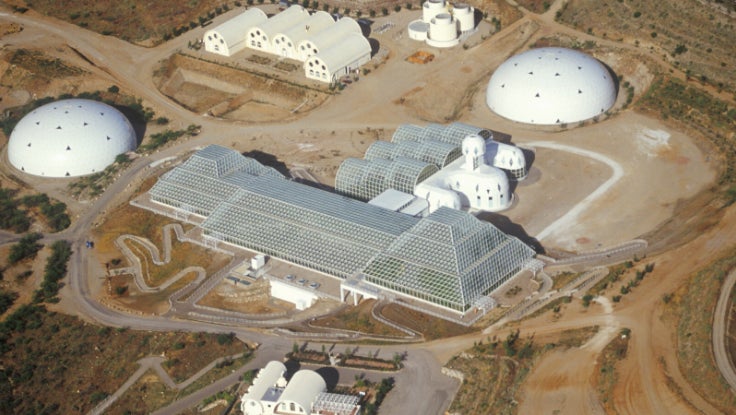 Popularized by everyone from Buckminster Fuller and George Orwell to Adlai Stevenson and Walt Disney World Resort’s EPCOT theme park, Spaceship Earth is a worldview that compares our planet to a ship — one with finite resources that must be respected — that we must live on harmoniously, like a crew, for the greater good.

For Allen and Bass, who took the concept even more literally, biospheres could be the way of the future. Not only could fully functional closed ecosystems help humans establish communities in space, but these biomes could also be the solution for surviving (what seemed like imminent) nuclear war. Perhaps unsurprisingly, opponents called the project "New Age drivel masquerading as science." After all, imagine how unbelievable landing on the moon sounded back in the 1960s!

However, although the goals were lofty — and, quite literally, out of this world — the system is based in science. In exploring the web of interactions within life systems — especially in a closed facility — researchers could better understand how ecosystems operate and respond to various stimuli. Of course, in order to create a completely closed system, free of variables, Biosphere 2 proved to be a feat of engineering. The above-ground sections are made of steel and high-performance glass, giving it that futuristic greenhouse look. All of the window seals are airtight, creating, in essence, an interior atmosphere of sorts.

Engineers designed large structures called "lungs" to account for the fact that the heat from the sun caused the air to expand during the day. An energy center was installed onsite to provide electricity, heating and cool water — you know, all of your standard living space utilities. There’s no doubt that Biosphere 2 has curb appeal, but what’s inside is even more captivating.

Inside Biosphere 2: The Quarantine Experiments of the 1990s

Inside Biosphere 2, there are seven distinct biome areas, including a rainforest, mangrove wetlands, a savannah grassland, a fog desert and a 9,100-square-foot "ocean," complete with a coral reef. There are also two anthropogenic biomes: an agricultural system and a human habitat full of living spaces and laboratories. Below ground is all the infrastructure, from piping to onsite natural gas and other resources. Needless to say, it’s all extremely thorough — and, yes, it does sound like something out of a movie. Even more sci-fi plot-adjacent were the experiments that occurred in the facility. 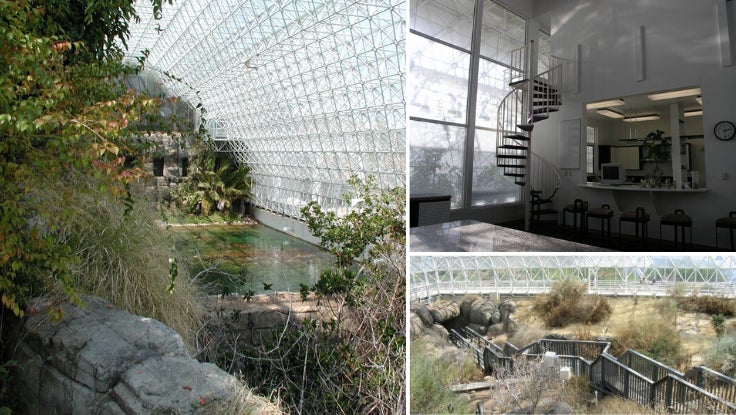 The first closed mission lasted two years, running from September 26, 1991, to September 26, 1993. The eight-person crew was made up of medical doctor and researcher Roy Walford, Jane Poynter, Taber MacCallum, Mark Nelson, Sally Silverstone, Abigail Alling, Mark Van Thillo and Linda Leigh. Known as biospherians, they subsisted on a diet of bananas, papayas, sweet potatoes, beets, peanuts, lablab and cowpea beans, rice and wheat, 83% of which was grown inside the agricultural biome. Although several biospherians reported feeling hungry on a regular basis during the first year of quarantine, The American Journal of Clinical Nutrition concluded that all of the crew members emerged with lower blood pressure and cholesterol levels as well as more efficient metabolisms.

Likened to island ecology, Biosphere 2 saw the rise and fall of various organisms contained within the dome. In addition to domestic animals like hens and African pygmy goats, pollinators and other insects were sealed inside. Some insects cross-bred to survive, and the invasive tramp ant species, which had unintentionally been sealed inside, overtook other species just as it would in the wild. Cockroaches also ruled the roost, proving that, yes, they can survive anything. Meanwhile, the less hardy biospherians had to contend with steady oxygen loss. After just 16 months, the oxygen levels inside the facility had fallen by about 6%, contributing to sleep apnea and fatigue.

As discussed in Life Sciences in Space Research, there were also psychological and group dynamic elements in play. "Appreciation of the value of biosphere interconnectedness and interdependency was appreciated as both an everyday beauty and a challenging reality," Roy Walford, one of the biospherians, later said. "I don't like some of them, but we were a hell of a team. That was the nature of the factionalism...but despite that, we ran the damn thing, and we cooperated totally."

The Future (and Present) of Biosphere 2

After extensive improvements to the facility were completed, a second 10-month mission began on March 6, 1994. While the second crew — made up of Norberto Alvarez-Romo (Capt.), John Druitt, Matt Finn, Pascale Maslin, Charlotte Godfrey, Rodrigo Romo and Tilak Mahato — had better luck when it came to food production, a dispute led to a surprising involvement and even more qualms. 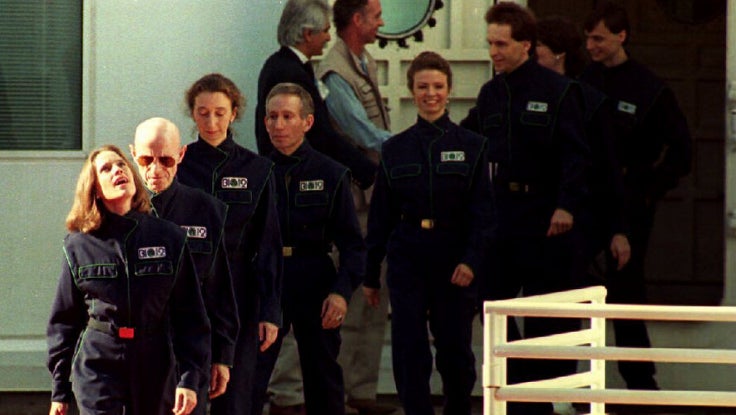 Ed Bass hired Steve Bannon, then an investment banking manager, to run Space Biospheres Ventures. Former biospherians were concerned about Bannon, who seemed more interested in the costs of the project than the safety of the crew (in their opinions). The change in management happened during the second mission, so at 3 a.m. on April 5, 1994, two former biospherians, Abigail Alling and Mark Van Thillo, allegedly vandalized the facility by breaking glass and opening a double-airlock door and several emergency exits for about 15 minutes. "[I] considered the Biosphere to be in an emergency state," Alling told the Chicago Tribune. "In no way was it sabotage. It was my responsibility."

Following the event, several crew members left and were replaced. Bannon departed, which resulted in a civil lawsuit filed against Space Biosphere Ventures, and the second mission ended early. Later, experts from Columbia University evaluated the facility, with the institution saying in a statement that "the Biosphere 2 facility is an exceptional laboratory for addressing critical questions relative to the future of Earth and its environment." Since the carbon dioxide levels could be easily manipulated within the closed system, Columbia scientists conducted global warming research there for a time.

After changing hands a few times, Biosphere 2 has been the property of the University of Arizona since 2007. Although the university conducts various experiments there — there’s even a lunar greenhouse that aims to find ways to grow produce on the Moon or Mars using a bioregenerative life support system — Biosphere 2 is mainly a tourism site now. According to TripAdvisor, this four-star attraction allows visitors to see "nature in a controlled state at this world-famous steel and glass research center where desert, forest, ocean and other ecosystems are monitored and studied." As far as roadside attractions go, this marvel of science, engineering and innovation is surely worth the admission price if you’re ever in Oracle.

Looking for something to do that's appropriately socially distant? Biosphere 2's walking tours have resumed around the exterior of the site and through certain interior areas. One-way paths ensure you and your party can follow along the path without encountering other visitors, and online-only ticket sales are limited per hour and per day. Masks are required at all times, and hand sanitizing stations are set up throughout the complex. A free companion app for iOS and Android helps you learn about the property and its contributions to scientific research before your visit.