Virtual Vacation: Explore the Azores From the Comfort of Your Couch

With the ongoing COVID-19 pandemic grounding most travel plans for the foreseeable future, we’re all starting to get a bit of cabin fever. However, the safest (and smartest) way to visit far-flung corners of the world is via your screen. So, where are we headed? The Azores — an archipelago in the Macaronesian Region of the North Atlantic Ocean, roughly 850 miles west of continental Portugal. The chain of nine volcanic islands is actually one of the two autonomous regions of Portugal — Madeira being the other — and, for decades, it was a relative secret to foreign tourists.

Wanting to curb overtourism is another compelling reason to make your visit to the Azores a virtual one. In fact, a few years ago, when Delta Air Lines started offering more accessible flights from North American hubs to the island, tourism spiked. The small nation has a population of about 245,000 and, in 2017, roughly 645,000 foreign tourists visited. Comparatively, Iceland, another spectacular Atlantic stopover caught between mainland Europe and North America, has a population of 330,000 but took in a whopping 2.1 million visitors in 2017.

"[The Azorean government] has taken preventative action, not reactive action," Rui Amen, of online travel agency Azores Getaways, told Conde Nast Traveler. "They always knew that tourism would grow in the Azores — this didn’t start last year. It started way before the Delta flights." To mitigate overtourism threats before they even began, Azorean officials set a cap on the number of beds that could be made available in hotels (not counting Airbnbs); now, around 12,000 beds are available to visitors across the archipelago, which is far below the 20,000-bed cap.

Additionally, the archipelago hopes to become the first one to be deemed a "sustainable tourism region" by EarthCheck, ensuring businesses will have to comply with some pretty rigid green policies and practices. This desire to protect the Azores gets at the heart of what makes it such a compelling destination in the first place: all that natural beauty.

Pitted with large, volcanic craters, São Miguel is the largest of the nine islands that make up the Azores. Despite being the most developed of the islands, 29% of São Miguel’s total land area is protected national parkland, and it’s this stunning landscape that attracts so many eager visitors each year. From coastal lava fields and volcano-built cave systems to roughly 60 protected marine areas that are home to jaw-dropping reefs and unique biodiversity, it’s difficult to compare the Azores to anything else on Earth. In some ways, the rugged beauty is comparable to Iceland, but, in most other ways, that comparison feels off. 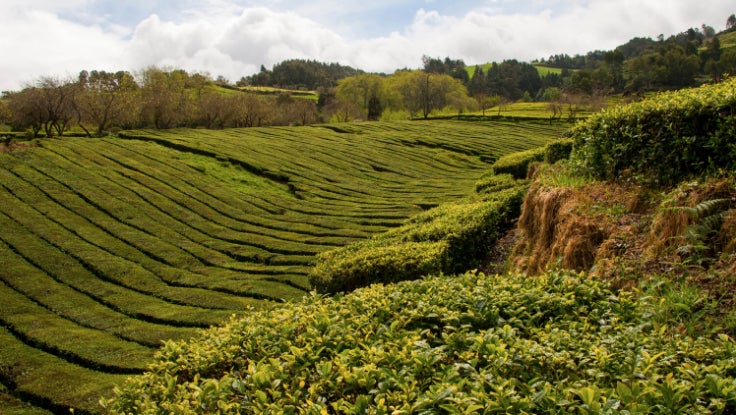 So, what natural features make the Azores worth visiting — or, in the very least, worth gawking at through a screen? On São Miguel, which is bisected by faults, hikers and horseback riders visit Sete Cidades Massif, a lake-filled caldera (a cauldron-like hollow formed by volcanic activity), and explore the rolling green of the pasturelands in the Picos region. Brilliantly blue lakes, like Lagoa do Fogo, and the towering Mount Pico, Portugal’s highest point, make the landscape all the more unreal. For a virtual glimpse of these remarkable locales and others, we recommend watching the nature doc Planet: Azores, which spotlights islands like Pico and Faial and contains shots of some of the 27 species of whales and dolphins that call the Azores home.

Get a Taste for the Azores by Making These Dishes

Unsurprisingly, Azoreans have developed their own distinct identity and culture by mixing their environment with customs from mainland Portugal and those brought to the archipelago by other immigrants. Part of that cultural identity, of course, is food. Thanks to the islands’ many microclimates, Azoreans have the ability to grow certain resources that mainland Europeans just don’t, including coffee beans, pineapple, blueberries, passion fruit and bananas. Additionally, the fertile volcanic soil has encouraged Azoreans to produce quality wine for the last 500 years or so, with Pico even being named one of just 14 UNESCO World Heritage Wine Regions that exist globally. 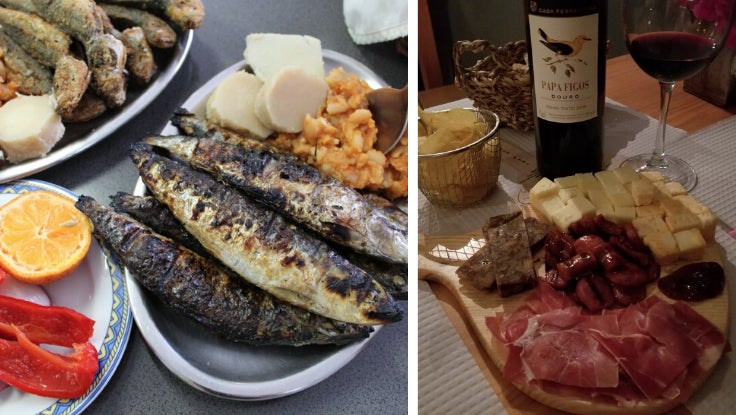 Of course, nothing pairs better with wine than cheese. According to Food Republic, about half of all the cheese found on mainland Portugal comes from the Azores, with the best of the best being produced on São Jorge. As it ages, the cheese gains a tangy quality — not just spicy, not just salty, but a unique mixture of both sensations. If you live stateside, you can find these traditional cheeses in one of two main Azorean communities: at Matos Cheese Factory in Santa Rosa, California, or in Fall River, Massachusetts, at Mello’s Chourico.

If cheese isn’t quite your thing, the cows that dot the lush, green pastures of the Azores may have something else to offer in the form of the island Terceira’s famous dish, alcatra, a pot roast-like meal in which beef is slow-cooked with red wine, onions, garlic, allspice and black peppercorns. Served with a puffy, slightly sweet bread called masa souvlada, alcatra is a melt-in-your-mouth sort of a meal.

Get Swept Away by Saudade, Rap and More

In addition to guitars (violão) and the 15-stringed bandolin, Azorean musicians play an instrument unique to the islands called the viola da terra. The instrument has between 12 and 15 strings arranged in five or six courses and has the traditional "hourglass" shape, though the instrument uses thinner tone woods than a standard guitar. According to Dazed, "Its very design is a nod to Azorean life in the middle of the Atlantic: the dual sound holes carved into the base of the wood are in the shape of two hearts, one to symbolize the heart taken with you when you’ve left the island…and one for the heart you’ve left behind." 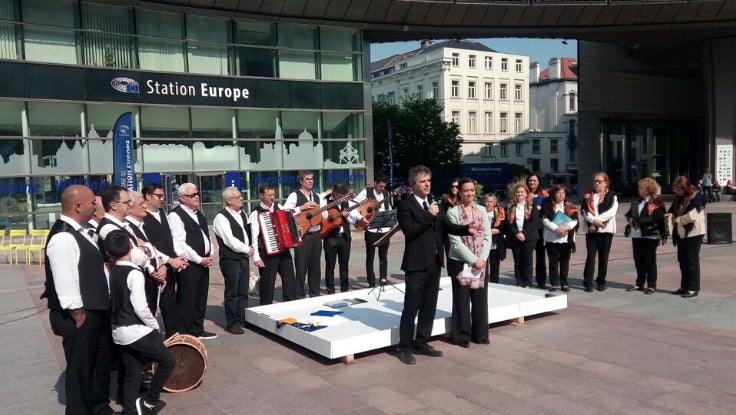 The viola da terra and other string instruments are used in a genre of Portuguese music called saudade, which aims to express a kind of melancholic nostalgia for what is absent or lost. This feels fitting for a place that, for decades (and even now), owns its isolation. Virtually, you can treat your ears to string music from a band based in São Jorge, which is by turns relaxing and deeply contemplative, or, if you want to hear the viola da terra in isolation, check out Rafael Carvalho, perhaps the most prominent viola da terra musician from the Azores. "It’s sad music. It’s like your heart pumping. People will cry if you play a saudade — no one has shame," Carvalho told Dazed. "When I’m playing, sometimes I have one or two tears. We live in this mist."

Looking for something a bit more lighthearted? Azoreans also partake in dances that thrum with Portugese tradition and are sure to get even those with two left feet out of their chairs. Perhaps surprisingly, the island usually hosts an annual avant-garde music festival called Tremor, which, in 2018, featured the likes of Mykki Blanco, Aïsha Devi and Sheer Mag and aimed to incorporate the natural landscape of São Miguel with the lineup by offering concerts near the island’s waterfalls and geothermal hot springs. Moreover, Azorean hip hop, inspired by the way rap has made it big on mainland Portugal, has started to become an important part of the musical culture, as seen in the work of the young Azorean rapper Fugitivo.

Hang Out on the Azores With Anthony Bourdain

After working in kitchens with generations of Azorean Portugese immigrants, foodie and modern-day philosopher Anthony Bourdain decides to take a trip to the Azores in one of the most engaging episodes of his No Reservations travel show. During his time there, Bourdain visited three of the country’s nine islands and, in doing so, he helped put the Azores on the map for many Americans back in 2009. 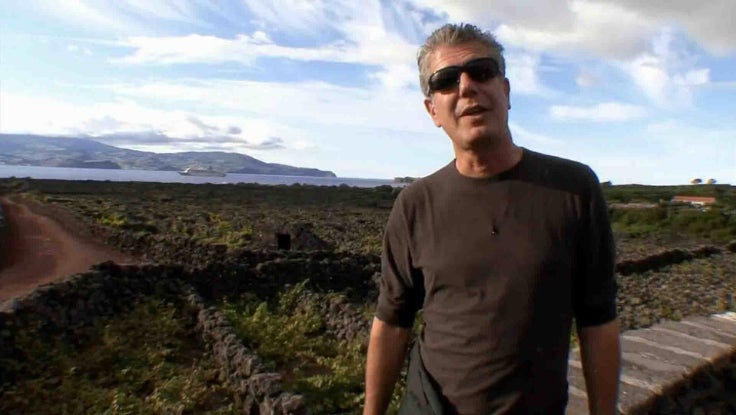 "Although many TV chefs have filmed episodes of their shows in Lisbon, very few have come to the Azores," Portugalist stated, noting Bourdain’s unique impact on the archipelago’s notoriety. From clams and barnacles to a very, very fresh queijo fresco, Bourdain tastes his way through the Azores and, despite his love of the unique food, finds himself a bit unsure of the beats of island life.

The sardonic host’s most memorable moment is, perhaps, when he tries the traditional dish cozido das furnas. The beloved stew is cooked in holes, or fumaroles, that are dug into the hot, volcanic soil. Typically, restaurants cook in gigantic metal stock pots placed in the holes during the early morning and return around midday to collect the stew, which is cooked thanks to all that natural geothermal heat. Needless to say, Bourdain’s up-close-and-personal look at cozido das furnas, and so much more, makes him the perfect virtual travel companion on a trip to the Azores.

Explore the Street Art of the Azores From Your Bedroom

The architecture of the Azores is unique: Black, volcanic stone and white stucco are punctuated by Roman Catholic influences, for example. This particular blend of aesthetics extends to the archipelago’s collection of art as well. For example, the Museu Carlos Machado, located on São Miguel, features a small but robust collection of "sacred art." The most impressive part of the collection is, by far, this wooden altar — the carvings are so numerous and intricate that it’s hard to believe your eyes, whether you’re there in person or peering through a screen. Outside of religious art, the Azores boasts a few other museums of note, like one dedicated to the history of wine on the islands, and another that spotlights the volcanic and geothermal qualities of the archipelago. 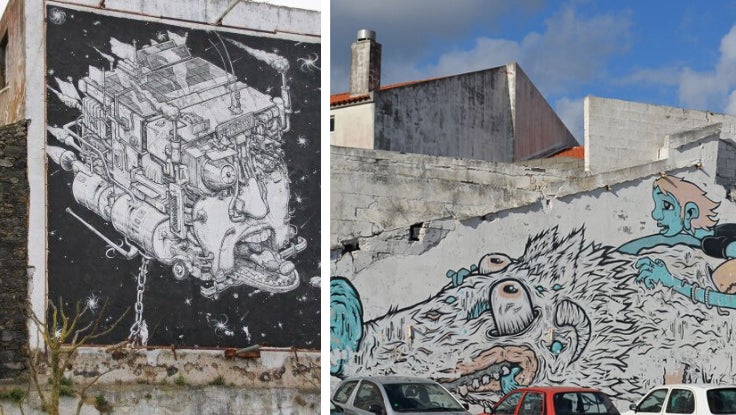 But where the Azores really shines in terms of its art scene is its street art. That may sound surprising given the archipelago’s remote quality; usually, street art is associated with developed, urban areas, not small cities in the middle of lush greenery. Well, the Azores has it all. Every year, the city of Ponta Delgada hosts a street art festival that attracts artists from all over the world, who, in combination with the Walk&Talk Urban Art Festival, transform buildings and benches and everything in between into incredible works of art.

While nothing beats walking through the streets and stumbling upon these hidden gems in person, RoarLoud has done an incredible job of collecting and curating some of the most breathtaking works online. While it’s not necessarily Google Arts & Culture quality, it feels equally as immersive, perhaps because the colorful art creates such a brilliant, and unexpected, contrast to the Azores’ natural wonders.