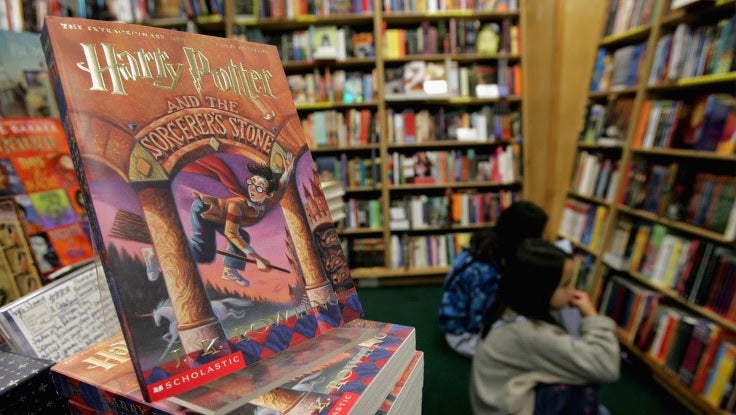 For fantasy fans, it’s been disheartening and disappointing to see J.K. Rowling’s recent lack of respect for the trans community. For an author who introduced kids to and explored major themes about the importance of people speaking up against intolerance, it’s been heartbreaking to see her defend radical, toxic beliefs that dehumanize trans people.

Seeing Rowling’s transphobic tweets and comments laid bare, you may feel the need to set aside the Harry Potter series for now. If so, perhaps you’re looking for something just as engaging to replace these books with. Start with these great series that are inclusive and diverse, welcoming characters of all orientations, genders and races.

"Children of Blood and Bone” by Tomi Adeyemi

Children of Blood and Bone is a 2018 book by Nigerian-American novelist Tomi Adeyemi. This is the first book in a planned trilogy, which follows heroine Zélie Adebola as she brings back magic to the kingdom of Orïsha after its magic users were purged. 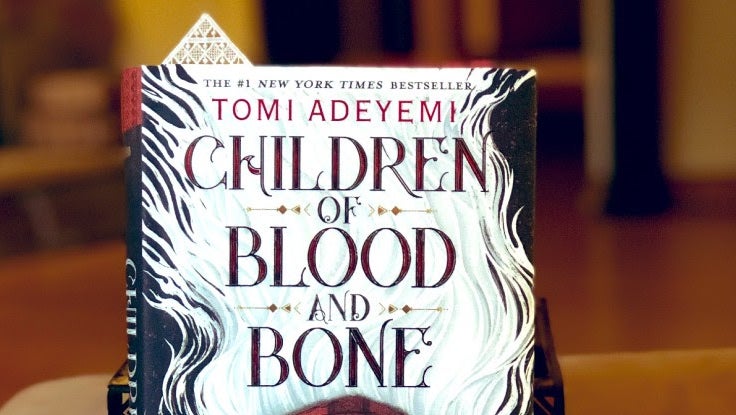 This work of fiction was inspired by novels like Harry Potter and An Ember in the Ashes but does a magnificent job of exposing readers to other cultures by blending in West African mythologies and the Yoruba language and culture. These elements converge to create Children of Blood and Bone’s world — one that’s unique yet strikingly similar to our own, considering that another major motivation for Adeyemi was the hopelessness the author felt about police brutality directed against Black Americans.

Writing the book took over 18 months and 45 drafts, but the end result has been a brilliant coming-of-age story that’s received high praise across many platforms. The New York Times has included the novel on its best-seller book list for young adults. The book has received mostly positive reviews, with critics digging deep into its examination of racism, oppression and slavery, noting how the Kosadan and Maji serve as the stand-ins for real-world groups. As Vann R. Newkirk II of The Atlantic explains, "That Children of Blood and Bone may prod readers to see a whole genre with new eyes could hardly be a more timely development."

His Dark Materials is a trilogy of fantasy novels by Philip Pullman that includes Northern Lights (originally published as The Golden Compass in North America), The Subtle Knife and The Amber Spyglass. The books follow the coming-of-age story of two children, Lyra Belacqua and Will Parry, as they make their way through parallel universes. 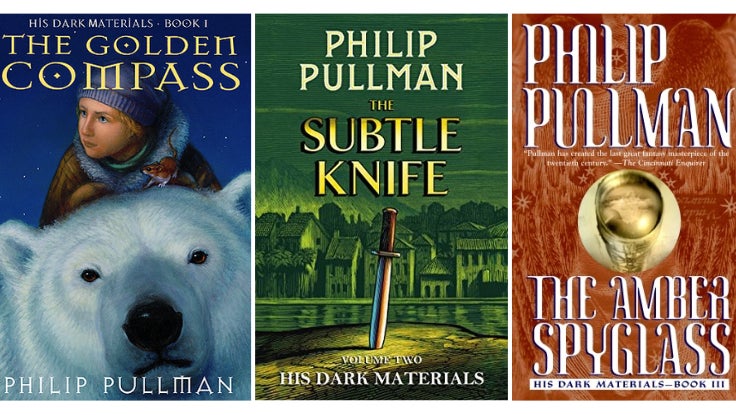 The books have been marketed as young adult (YA) reading, but Pullman didn’t write them with a particular age group in mind. The trilogy is a sort of retelling and inversion of John Milton’s Paradise Lost, but it also weaves elements from fantasy, like witches and anthropomorphic animals (in this case, armored polar bears) into the narrative. The novels also include concepts from studies in physics, philosophy and theology. The trilogy commends humanity for what Milton viewed as humans’ most tragic failing: original sin. This has created some controversy among various religious groups.

The novels have been awarded multiple accolades, including the Carnegie Medal and Whitbread Book of the Year, and ranked in the third spot of BBC’s The Big Read poll. The series of books has been made into a film, The Golden Compass, which received much criticism from religious leaders. It’s also been turned into a British fantasy drama television series that premiered in November 2019.

Another newer fantasy series comes from Jamaican writer Marlon James: the Dark Star trilogy. The epic fantasy includes the titles Black Leopard, Red Wolf; Moon Witch, Night Devil; and The Boy and the Dark Star. The tales follow three characters — the Tracker, the Moon Witch and the Boy — as the three mercenaries make their way through a dark fantasy world and await their impending torture and trial in the dungeon of a dying king. 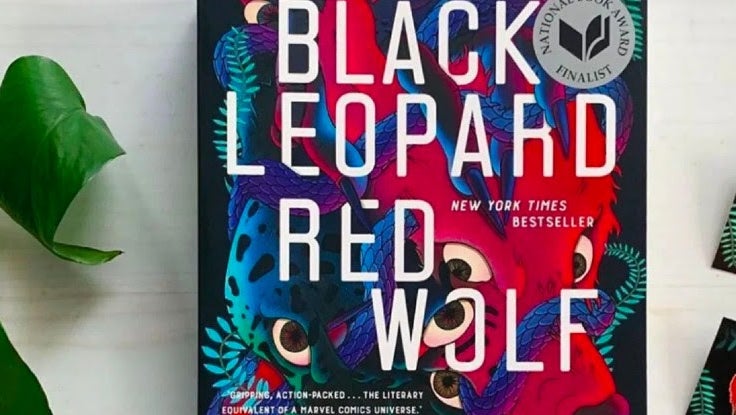 The first book was released in 2019, and the two remaining planned novels are forthcoming. The story draws from African history and mythology and explores political tensions rising between two warring states, various tribes and city-states, exploring truths, ambition, the limits of power, duty and honor in the process. The first offering in the lineup was influenced by many favorite epics, including The Lord of the Rings and the now-classic Game of Thrones.

“Inheritance” Trilogy and the “Broken Earth” Trilogy by N.K. Jemisin

N.K. Jemisin debuted her first novel, part of the Inheritance trilogy, in 2010, which elevated her to the position of one of the most prominent Black sci-fi/fantasy authors in the United States. And her novel The Fifth Season, which is part of her Broken Earth series, won the Hugo Award for Best Novel, making her the first Black writer to earn this title in that category. 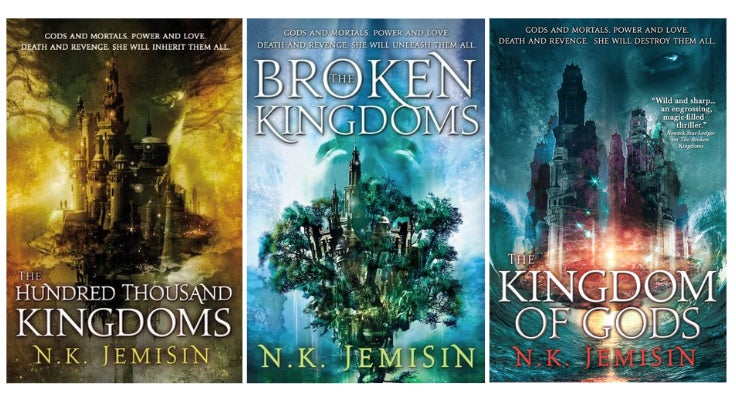 The Inheritance trilogy follows a cast of mortals and gods as they navigate politics, class warfare and slavery under the umbrella of twisted power dynamics, and the Broken Earth trilogy follows three connected women in a magical society in which man’s monstrous actions outweigh the horrors of the natural disasters that plague their world.

“Carry On” by Rainbow Rowell

If you’re looking for a close-proximity novel to Harry Potter that takes the excitement a step further with the inclusion of LGBTQ+ characters, then you’ll love Carry On by Rainbow Rowell. The smooth, romantic language warms the heart with deep character development and storytelling that fans have loved from Rowell in previous novels. 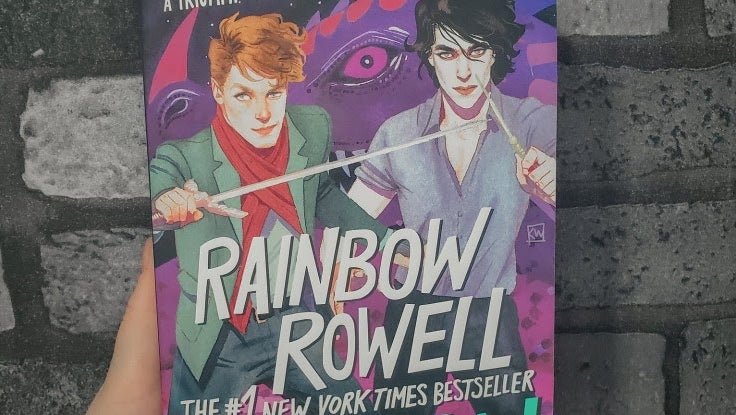 This one is a departure from Rowell’s typical fiction, diving into the epic fantasy of a magical world, following the main character and friends at their magic school. The LGBTQ+ protagonists lead the way through a beautiful love story filled with ethereal imagery and a narrative that’s creative, beautiful and well worth your time spent with the book.

Are you looking for something a bit less violent than the brilliant Black Leopard, Red Wolf? This series by Roshani Chokshi is a winner. The beautiful writing in The Star-Touched Queen books is lyrical and lush, bringing the characters and events to life in a vivid and mesmerizing way. This YA romantic fantasy plunges you into a captivating retelling of the story of Hades and Persephone with a deep Indian-mythology twist. 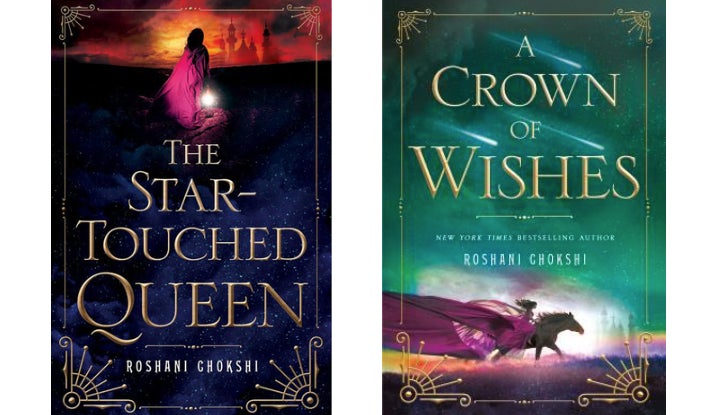 The first book follows Maya, a 17-year-old girl cursed to marry into doom and destruction. Her path crosses that of an otherworldly man who introduces her to a kingdom that holds the key to her past and future. Needless to say, Maya’s epic journey is fascinating and makes for an enlightening, page-turning read.