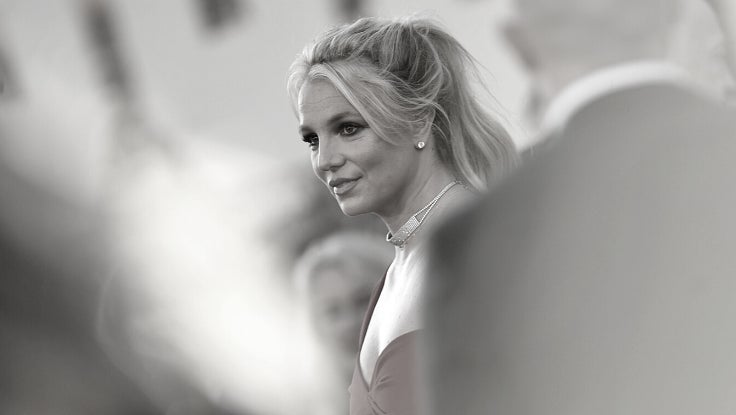 Britney Spears rose to superstardom in the late 1990s and is commonly referred to as the "Princess of Pop." But, unfortunately, the singer's phenomenal success was followed by damaging media coverage. Tabloids looking to sensationalize Britney's life did so to the detriment of the singer's mental health — and the consequences have been lasting.

In 2008, closed door legal proceedings led to the pop star being placed under a strict conservatorship. The conservatorship, which is governed by her father, Jamie Spears, has not only stripped the singer of her agency, but it has cast a harsh light on how mental health is covered and discussed at large. Now, over a decade later, Spears, 39, is still under that conservatorship, and, in the wake of the new New York Times documentary Framing Britney Spears, the #FreeBritney movement has seen a recent resurgence.

How Did the Conservatorship Come About?

By the mid-2000s, the stress of superstardom and constant public scrutiny had taken an emotional toll on Britney — and tabloids were more than eager to take advantage of that, sensationalizing and pathologizing her every action. Despite the barrage of misinformation and prying photographers, Britney checked into a mental health facility, but the intrusive headlines kept coming. 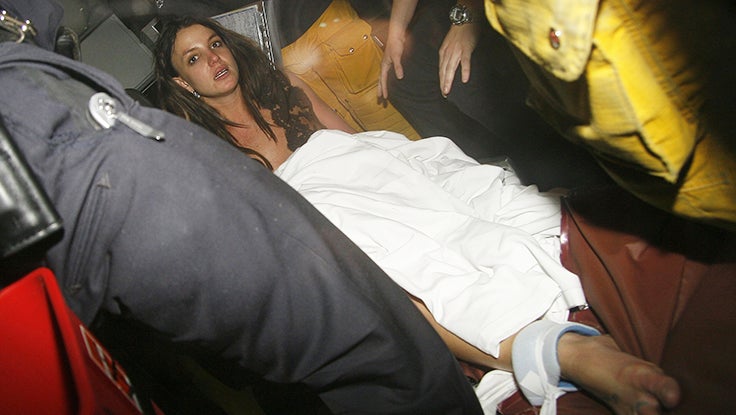 In fact, she ended up losing custody of her two sons, whom she'd had with ex-husband Kevin Federline. Additionally, her father petitioned the California courts to take control of Britney’s personal, financial and medical decisions via a conservatorship. The court-approved mandate made the pop star a ward of her father's — and, as such, he was granted control of her $47 million estate and her personal and professional activities. After six months, the temporary conservatorship became permanent; the documents have always remained sealed, so the exact reasons for the decision are unknown. In the 2008 MTV documentary Britney: For the Record, Britney compared the conservatorship to being incarcerated, calling her situation "never-ending."

The Rise of the #FreeBritney Movement

As early as 2009, fans of Britney — who believe the singer is being unfairly held “captive” by her family and management team — started the #FreeBritney campaign to demand her release from the conservatorship (via Rolling Stone). Around this time, Britney recorded her sixth album, Circus; appeared on the MTV Video Music Awards; and toured, but fans continued to speak out on the singer's behalf. In response to the public backlash to the conservatorship, a lawyer claiming to represent Britney — who the singer couldn’t have hired herself under the terms of the conservatorship — failed to get any restrictions removed, with the judge declaring that doing so would be a "travesty of justice." 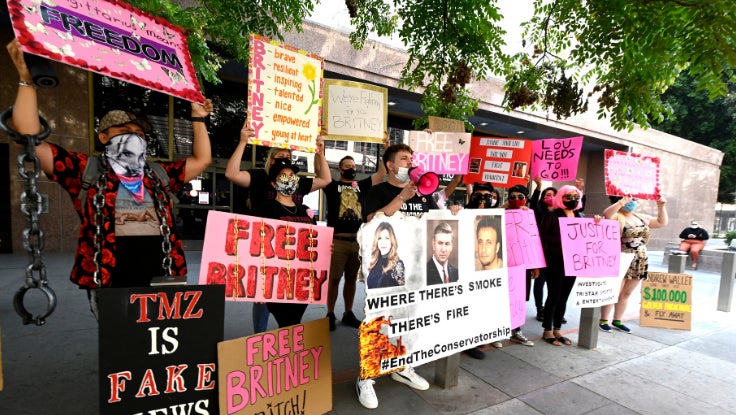 In the years that followed, Britney began a four-year Las Vegas residency while continuing to release new music and tour. Her father has maintained complete control of her financial, personal and professional decisions. Additionally, she is closely monitored by "handlers" and doesn't have access to email. In fact, Britney can’t file her own tax returns or "pursue opportunities related to professional commitments," including "performances, music recording, music videos, tours, TV shows and other similar activities," without the consent of her medical team.

Fans Aim to Expose the Corruption of the Conservatorship

As the Washington Post reported on May 17, 2019, "Sources close to the singer are pushing back on the #FreeBritney narrative, emphasizing that Spears is in the conservatorship for a reason — long-term mental-health issues that they would not specify. They know #FreeBritney is born out of fans' love for her, they say, but insist that fans don't understand the details of Spears' condition and the logistics of the legal arrangement, which is monitored closely by medical professionals and the courts." 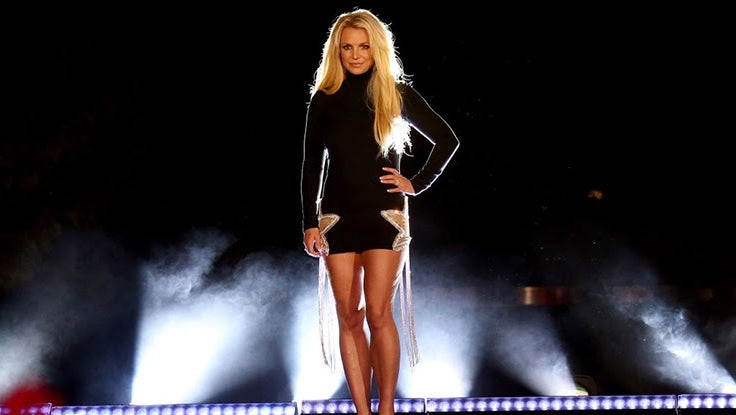 Her manager, Larry Rudolph, said, "The last thing any California state judge wants is to do something incorrectly and inappropriately and be the subject of a story about a judge that has done something wrong to Britney Spears." He goes on to insist the conservatorship "helps Britney make business decisions and manage her life in ways she can't do on her own right now." After her father became ill with a life-threatening colon condition, the personal components of the conservatorship were transferred to Jodi Montgomery, a longtime employee dubbed Britney’s "care manager."

In early January 2019, just before her second Las Vegas residency, Britney posted an announcement on her website. "This is so tough for me to say," the statement said. "I will not be performing my new show Domination. I've been looking forward to this show and seeing all of you this year, so doing this breaks my heart. However, it's important to always put your family first, and that's the decision I had to make."

Millions of dollars were already invested in the Las Vegas residency, so the decision led to a surge in theories about the cancellation. One key point of interest was that the original attorney working with Jamie Spears resigned only a few months after requesting a raise. Additionally, in April 2019, People claimed that Britney "checked into a facility for 'all-encompassing wellness treatment’ and needed to focus on herself."

Some criticize the #FreeBritney movement because the supporters of it lack "first-hand knowledge" of the situation. Nonetheless, her die-hard fans stress that, unlike the tabloids, they don’t speculate on Britney’s mental health. Instead, their aim is to expose the corruption of the conservatorship and the ways people are continuing to benefit financially from Britney's career at the expense of her agency and health.

Over the summer in 2020, Britney posted videos and photos on Instagram, reigniting the #FreeBritney movement. In mid-August 2020, Britney’s attorney requested a substantial amendment to the conservatorship, which was set to expire on August 22. Despite Britney’s opposition to her father's continued control and his request for a co-conservator, a judge extended Jamie Spears' control until February 2021. Now, Britney's father is a co-conservator alongside the Bessemer Trust Company. 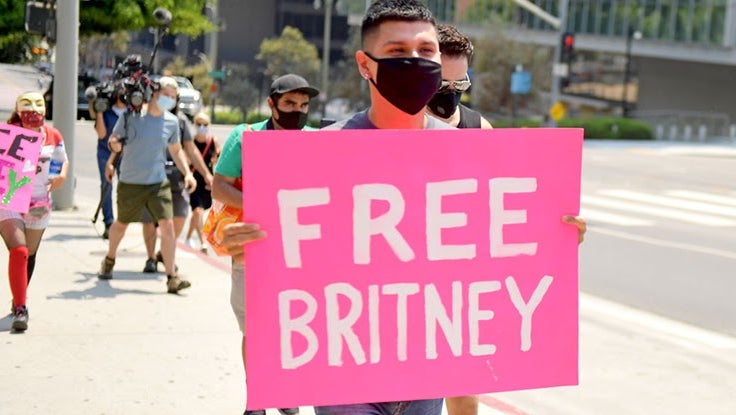 As that 2021 date nears, The New York Times' new documentary, Framing Britney Spears, has debuted on FX and Hulu. "While Spears’ legal battles are well-publicized, the documentary also touches on themes of media bias and mental health," Rolling Stone notes, "especially when addressing the star’s supposed 'breakdown'" in 2007. As the doc illustrates, when it comes to celebrities and mental illness, we need to stop gawking at mental illness or making celebrity's actions into memes and soundbites.

This starts with how mental illness and conditions are covered by media, and how we talk about mental health at large. Bassey Ikpi, author of I'm Telling the Truth, but I'm Lying: Essays, has publicly advocated for the media to reassess how it covers celebrity mental illness and the actions that stem from living with said illnesses. “Mental illness is not an excuse, but it is a reason,” Ikpi told WBUR. “And it has to be contextualized. It has to be framed so that people understand that the way that one behaves is the literal definition of what a mental illness is.”

Of course, unlike most other celebrities, Britney's situation is complicated further by the abusive actions of those around her. Nonetheless, the #FreeBritney movement helps to underscore the importance of supporting folks in the spotlight and spreading real awareness about mental health. After all, it's abundantly clear that sensationalized tabloids, soundbites and memes have had an enduring impact on Britney's life.