Ask Answers: How Will the COVID-19 Pandemic Impact Our Approach to Art and Museums? 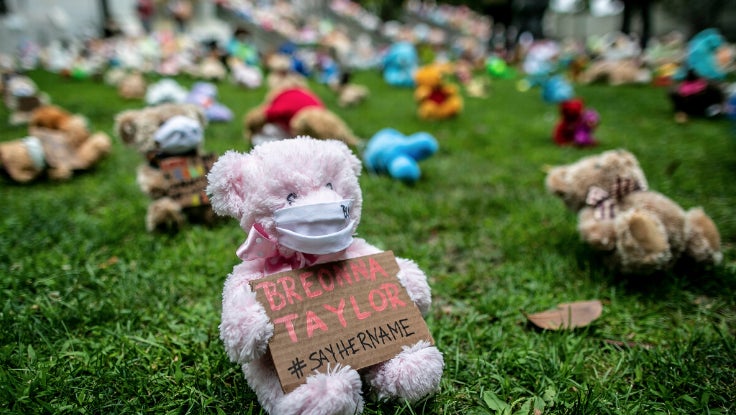 Bear the Truth, a temporary art installation at City Hall in Los Angeles, is meant to be a “positive gateway for children to use their voices for change.” Designed by Mae and Sydni Wynter; June 28, 2020. Credit: Robert Gauthier/Los Angeles Times/Getty Images

Without a doubt, the COVID-19 pandemic is changing the way audiences view art. From virtual tours and talks to meditative and educational livestreams, museums and other cultural institutions are finding unique ways to keep would-be guests engaged from the comfort of their living rooms. And although we’re all getting screen fatigue, when it comes to experiencing live music, it’s hard to imagine a socially distanced twist on concerts or shows that feels both safe and wholly engaging.

But the shift hasn’t stopped with how we experience art. How creatives make art and tell stories will also be irrevocably altered as a result of the pandemic. While it might feel like it’s "too soon" to create art about the pandemic — about the loss and anxiety or even the glimmers of hope — it’s clear that art will surface, sooner or later, that captures both the world as it was and the world as it is now. There is no "going back to normal" post-COVID-19 — and art will undoubtedly reflect that.

How Will Museums, Galleries and Art Spaces Adapt?

When it comes to social distancing, the Mona Lisa is a pro. Located at the Louvre Museum in Paris, France, Leonardo da Vinci’s beloved Renaissance painting is displayed in a purpose-built, climate-controlled enclosure — complete with bulletproof glass and several feet of space between its spot on the wall and the stanchion that holds legions of viewers back. On average, 6 million people view the Mona Lisa each year, and while the painting is somewhat of an anomaly, large museums like the Louvre are inundated with throngs of visitors on a near-daily basis. Or, at least, that was true for these popular tourist sites before the novel coronavirus hit. 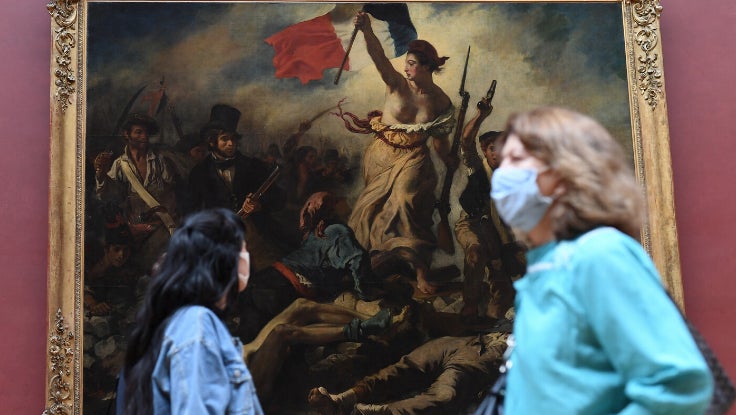 On July 6, visitors wearing protective face masks are seen at the Louvre Museum in Paris, France, as it reopens its doors following its 16-week closure due to lockdown measures caused by the COVID-19 pandemic. Credit: Pascal Le Segretain/Getty Images

On July 6, the Louvre ended its 16-week closure, allowing masked folks to mill about and take in works like Eugène Delacroix’s Liberty Leading the People (above) from a distance. Unlike theaters, cinemas and concert halls, museums might be better equipped than other tourist hotspots to mitigate visitor contact and control crowds. It’s not uncommon for institutions with popular exhibitions to institute timed ticketing blocks or curb how many guests enter a gallery space at a time. So, the question remains, what sort of art will folks come out for post-COVID-19 pandemic? As the world’s most-visited museum, the pre-COVID-19 Louvre welcomed 50,000 people a day on average.

Now, to protect visitors, the museum has instituted mask and three-feet distancing requirements, an online-only reservation system and a one-way path through the building. No more meandering from piece to piece — especially since one-third of the Louvre remains closed. According to NPR, the Louvre anticipated 7,000 people for its day-one reopening, especially given that 70% of its visitors in 2019 were tourists. While 7,000 is nowhere near 50,000, it still feels like a large gathering of people, no matter the restrictions the museum has put in place. It’s certainly large by COVID-19 standards.

Why brave the pandemic to see the Mona Lisa then? For many folks in the art world, including, general director of Opera Memphis Ned Canty, going to a museum or art space is more than just something to do to break up the monotony of sheltering in place. "[W]e will always want to share that with someone next to us," Canty says. "Whether we know that person or not, that increases the value of the experience for everyone… It is a basic human need that will not go away."

What Can We Learn from the Art of Pandemics Past?

In the mid-14th century, the Black Death, an epidemic of the bubonic plague that swept through Eurasia and North Africa, killed between 75 million and 200 million people. In response, Boccaccio penned The Decameron, a "human comedy" about people who flee Florence during the Black Death and keep their spirits up by telling comedic, tragic and raunchy stories. It might have seemed strange in your college lit course, but, now, in the face of COVID-19 memes and TikTok videos, maybe The Decameron’s comedy-in-the-face-of-despair perfectly captured the zeitgeist? 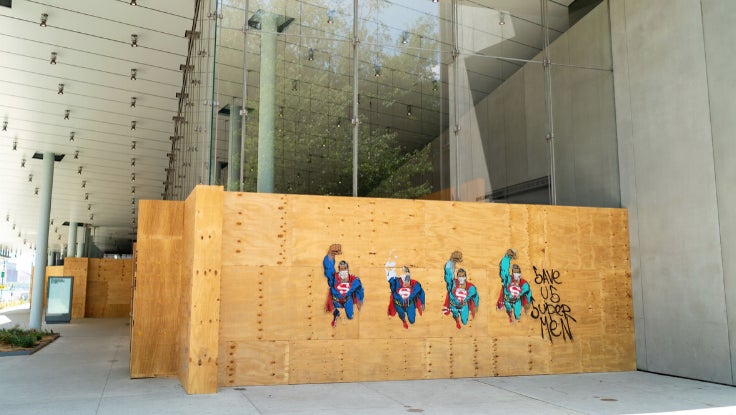 Graffiti of Superman wearing a protective face mask is displayed on the boarded-up windows of the Whitney Museum of American Art on June 19, 2020, in New York City. Credit: Gotham/Getty Images

In the wake of the 1918 flu pandemic, artist Edvard Munch painted Self Portrait After the Spanish Flu. Not unlike the selfies taken by tired, despairing healthcare professionals and overwhelmed COVID-19 survivors, Munch’s self-portrait captured not only his jaundice but a sense of despair and nihilism. At a time when folks were dealing with the era’s dual traumas — the end of World War I and 50 million deaths worldwide due to the influenza pandemic — it’s no wonder the art world shifted so drastically.

With this in mind, it’s clear that past public health crises have shifted the aesthetics and intent of the work artists are moved to create. Not unlike the early 20th century, we are living through a time of staggering change. Not only are we contending with a health crisis, but in the United States, folks are protesting day in and day out, rallying behind the Black Lives Matter Movement; the fight for the rights and sovereignty of Indigenous peoples; trans and queer rights movements; and the fight against climate change.

The Importance of Art Outside of Museum and Gallery Spaces

The AIDS Crisis of the 1980s and 1990s — augmented by the silence and inaction from President Reagan and the Centers for Disease Control and Prevention — devastated a generation, namely a generation of gay men, Black people and other queer people of color. In addition to fighting for their public health concerns to be recognized in the midst of the HIV/AIDS epidemic, activists were also fighting for human rights. As such, myriad artists, such as Keith Haring, Robert Mapplethorpe, Andres Serrano, David Wojnarowicz and Nan Goldin (just to name a few), lent their work and voices to bring visibility to what the government was ignoring. 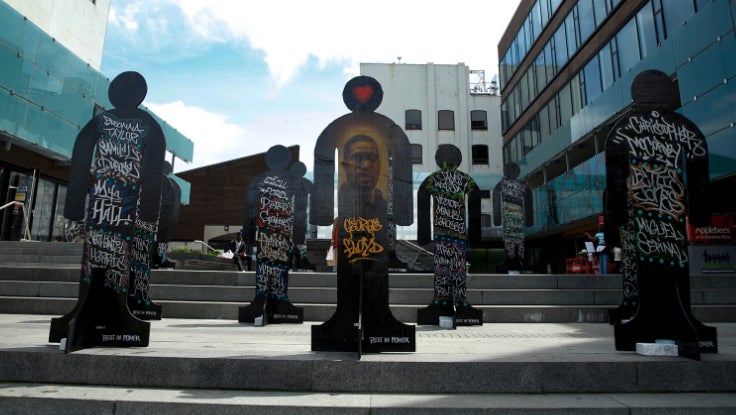 The intent behind these works varied: Some pieces were meant to document the epidemic, while others were meant to amplify silenced voices and underscore the humanity of folks fighting for their lives. The goal wasn’t to make museum-approved works. Now, during a time of immense change and disruption, stopping in at museums isn’t even an option in the U.S. — but we can still see important, era-defining works of art emerging all around us. In the wake of George Floyd’s murder and the first wave of Black Lives Matter Protests in 2020, artists across the country — and even the globe — took to the streets to create murals dedicated to Floyd, to Black activists and to promoting radical change. In parks and public spaces all across the world, activists are toppling statues and other monuments to racist and bigoted historical figures, making way for artists to immortalize new (and actual) heroes.

In addition to street art, artists and art collectives have seized the opportunity to capture the general public’s attention with other forms of protest art. In Brooklyn, New York’s Bed-Stuy neighborhood, an anonymous group of artists installed a Black Lives Matter piece (above). In it, Black figures, covered in the names and images of Black men and women who have been murdered at the hands of police and because of white supremacy, fill a Fulton Street plaza. Across the country, in Los Angeles, Mae and Sydni Wynter designed the temporary installation, Bear the Truth, at City Hall. The grassroots exhibition, made up of teddy bears holding Black Lives Matter signs and touting face masks in the face of the ongoing COVID-19 pandemic, is meant to be a "positive gateway for children to use their voices for change."

From murals on the sides of buildings to installations in public spaces, these works of art are accessible to all — there’s no monetary barrier to entry, and they’re in open spaces, which allows folks navigating the pandemic to still see them. This isn’t a new way of displaying or experiencing art by any means, but it certainly feels more important than ever. Needless to say, it’s difficult to conceptualize what sorts of mediums or imagery will dominate post-COVID-19 art, but it’s clear that the art will be as revolutionary as this moment in history.