Looking for social media alternatives to Facebook can prove tricky. As we’ve recently discussed in our deep dive into the Metaverse, Facebook — now known by the parent company name Meta — seems to be everywhere. Not only does the Mark Zuckerberg-helmed company own the popular social networking site, but it’s also the force behind the photo-centric Instagram, the SMS chat app WhatsApp and a virtual reality (VR) space known as Horizon Worlds.

Of course, it’s no secret that Facebook — and, by extension, Meta — has been in some hot water. From very real concerns about privacy and cyberbullying to the ways in which the site’s targeted ads have taken a toll on kids’ mental health, Facebook isn’t looking too appealing right now. Not to mention, the social media platform has been accused of spreading misinformation and fake news, particularly during the contentious 2020 presidential election.

Whether you’re tired of Meta’s lack of accountability or concerned about your privacy, it may be time to try one of these five social media alternatives to Facebook.

Dubbed the “non-toxic network,” WT.Social — also known as WikiTribune Social — is a social media platform for sharing news and facilitating discussions. The platform’s selling point? It doesn’t operate on an algorithm, which means your data isn’t being packaged or sold. The social media site is a replica of WikiTribune, even incorporating Wikipedia’s editing feature. In 2016, Wikipedia co-founder Jimmy Wales launched the platform to give users one of a few social media alternatives to Facebook and Twitter.

Setting up an account is pretty straightforward. All you need is a valid email address and a password. Once you register, you can log in — and that’s about it in terms of setup. Once you’re on WT. Social, you’ll see various topics — a.k.a. sub-wikis — displayed in your feed. These clusters of different topics help you see what folks are chatting about, and what discussion or topic you may want to contribute to directly.

Without any pesky algorithms or advertisements that dictate your feed, you have complete control over your WT. Social experience. Plus, the platform has a firm position on spreading misinformation, unlike other sites. Thankfully, the contribution and microblogging features allow you to edit false content. Similarly, if you violate the site’s terms of use, you’ll find WT. Social moderators take that seriously. Unlike other popular social media sites, WT. Social aims to connect people — with fairness and honesty.

Started by Florian Meissner, Ramzi Rizk, Gen Sadakane and Lorenz Aschoff in 2011, EyeEm was initially a photo-sharing app for iOS users. Now, it’s grown into a global community and marketplace for photos. Much like the Facebook-owned Instagram, EyeEm allows you to upload photos and comment on others’ work. You can also interact directly with the author of a post. Reportedly, the company had over 70 million photos and 18 million users in 2016.

By providing more than 100 million high-quality images, EyeEm isn’t just a means of connecting. In fact, it has transformed the stock photography market. Marketing agencies and brands alike are pretty fond of the app. It’s a bit like Flickr-meets-iStock, really, but the image recognition technology, which can separate photos based on quality, is pretty next level. And, when you upload images, EyeEm provides a set of suggested keywords to use as tags.

The platform is ideal for visual creators with a good eye for photography and videography. Not to mention, this online portfolio allows you to earn some money by licensing your photos. With competitive rates for sellers, EyeEm ensures you’ll receive over 50% of the total sale and keep the photo’s copyright, thus allowing you to sell the same image more than once.

As a stock photo site first and foremost, EyeEm’s high standards mean not every upload will meet said standards. EyeEm actually vets your content for specific technical requirements before you upload anything. So, while it can be a fun way to share photos, it’s certainly not one of the traditional social media alternatives to Facebook.

Minds: Social Media Alternatives to Facebook That Pay You to Be Online

Introduced to users in 2015 by John Ottman, Bill Ottman and Mark Harding, Minds is a community-owned social media platform that pays you to use it. Like Facebook, users can post videos and photos, use hashtags and post statuses. However, depending on your online activity, you’ll receive cryptocurrency in exchange for your time.

If you don’t want to trade in that crypto for traditional money, you can use it to crowdfund other users or boost your posts. So, how exactly does your time on social media translate to funds? On a daily basis, Minds actively monitors how users interact on the site. You’ll later receive an amount of crypto that’s based on your “contribution percentage” to the platform. The more viral your posts are or the more you interact with others, the higher the reward.

If you want more privacy and transparency when it comes to social media alternatives to Facebook, Minds is ideal. Another interesting feature? Minds allows you to build your own algorithm. Once you log in, you’ll see a ‘Build your Algorithm’ button at the top, which you can use to decide what you’ll see more of as you scroll.

As you might expect, users can share photos and videos, create personalized profiles, follow other users and perform other Facebook-like actions. The big difference? This is one of the social media alternatives to Facebook that ensures your user data is in safe hands. Since Mastodon is a decentralized company, there’s no possibility of a monopoly owning your user data.

In fact, Mastodon may be more of a Twitter alternative, really, based on its features, many of which share uncanny similarities to those of the “bird app”. For instance, a “Tweet” is referred to as a “Twoot” on Mastodon, and while Twitter’s max character count is 280, Mastodon allows for just 50 characters.

As an open-source app, interactions on Mastodon are moderated on servers, or instances. That said, a server administrator is in charge of setting rules, so if your post violates a server’s rules, you may have to find a different server on which to register your account.

Vero is “more social, less media” in that it provides users with an ad-free, interactive experience without algorithms or data mining. Ayman Rafic Hariri, a Lebanese billionaire and businessman, is the mastermind behind the app, which launched in 2015.

Privacy concerns and data leaks from big-name social media networks helped the app jump from below #1500 on the app store to the top position. With over three million downloads, Vero is quickly becoming one of the great social media alternatives to Facebook — and Instagram.

Much like other popular social media apps, Vero allows you to share your location; post videos, photos and links; and recommend music, films and books to others. The main difference between Vero and Meta’s platforms? There’s no ads. There’s zero data mining. There aren’t even algorithms there to serve you a specific feed.

To reiterate its stand on data privacy, Vero continues to publicly declare its business model and manifesto. And that manifesto even touches on mental health concerns, too. The people behind the platform clearly understand how addictive social media can be, so Vero doesn’t use push notifications, nor does it tell you how much time you’ve spent on the app each day. 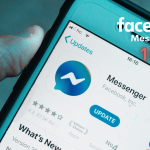 Facebook Messenger 101: Everything You Need to Know About the Messenger App
1