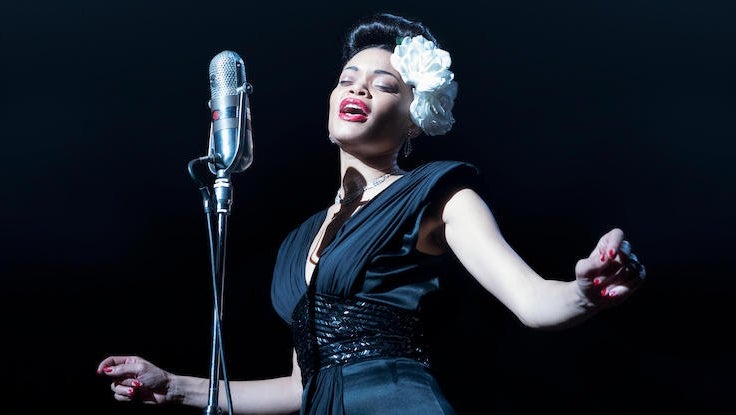 For director Lee Daniels (Precious) recounting the story of jazz singer Billie Holiday was a part of American history that needed to be told.

The Academy Award nominee recalls seeing 1972’s Holiday biopic Lady Sings the Blues, in which Diana Ross made her feature film debut. He was 13. "The movie changed my life," Daniels said during a virtual press conference on February 3. "I saw these two Black people [Ross and Billy Dee Williams] on screen. I’ve never seen beautiful people like that before kissing, loving each other. The fashion, the music..."

The United States vs. Billie Holiday — which starts streaming on Hulu on February 26 — is not Lady Sings the Blues. Daniels produces and directs this new take on Holiday’s life based on a screenplay from Pulitzer Prize-winning playwright Suzan-Lori Parks (Topdog/Underdog). Parks adapted her script from Johann Hari’s 2015 bestselling book ​Chasing the Scream: The First and Last Days of the War on Drugs.

The movie, set in the 1940s and 1950s, resists the biopic formula and focuses on the latest years of Holiday’s career. Three-time Grammy Award nominee and singer Andra Day makes her feature performance debut playing the blues legend. The film portrays elements of Holiday’s life that have been explored before: her undeniable talent as a musician, her drug use, her involvement with men that didn’t care for her. The United States vs. Billie Holiday also examines the singer’s relationship with the United States government and makes a case for her status as a civil rights leader.

In the film, Daniels details how the then-Federal Bureau of Narcotics (FBN) dissuaded Holiday from singing "Strange Fruit" — which The United States vs. Billie Holiday describes as a "lyrical, horrifying description of a lynching." Later, "Strange Fruit" became a protest song.

"This jazz music is the devil’s work. That’s why this Holiday woman gotta be stopped. She keeps singing the ‘Strange Fruit’ song and is causing a lot of people to think their own things," Garrett Hedlund’s character says early on in the movie. He plays Harry J. Anslinger, who led the FBN. The government would end up using Holiday’s drug addiction as a pretext to arrest and convict her. Anslinger goes as far as to say in the movie that drugs and Black people — he uses a racist epithet — are "a contamination to our great American civilization."

And here’s one of the main problems in The United States vs. Billie Holiday. The movie could have benefited from more subtlety. It would still have been possible to show Anslinger’s racism and Holiday’s activism without the need of spelling everything out for the viewer. Shaka King’s Judas and the Black Messiah, another 2021 title that deals with the history of racism in America, found a way of incorporating deeply troubled and prejudiced federal agents into the narrative of the story without making them appear oversimplified or one-note.

"Strange Fruit" becomes a forbidden anthem in The United States vs. Billie Holiday. For Holiday, but also for the viewer. We get a tease of it when Holiday attempts to sing the theme a cappella 26 minutes into the movie — but she’s forced to quit. We see Holiday sing "All of Me," "Solitude" and "Ain’t Nobody’s Business" before she finally gets the chance to perform "Strange Fruit" while touring the American South. Daniels pauses on a close-up of Day’s face for the entirety of the song. The singer-turned-actress’ face is doing all the work, along with her raspy husky voice. 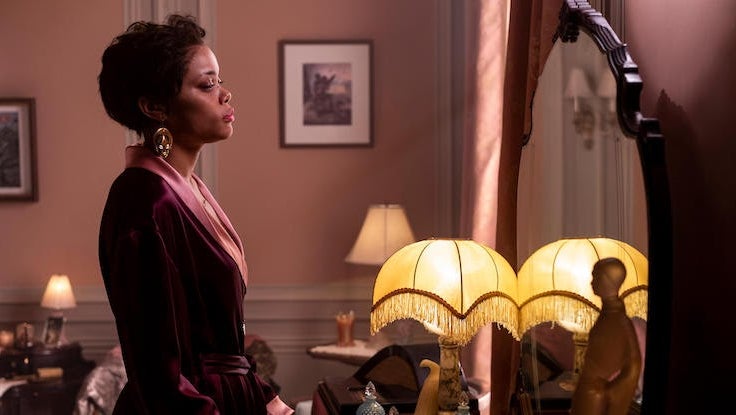 When the song ends, Daniels cuts to two newspaper clippings relating to Holiday’s show. The headlines read: "Holiday Defies the Clan: Sings Strange Fruit" and "An Act of Courage in the South."

Even if The United States vs. Billie Holiday is tonally uneven, there’s nothing flawed about Day’s interpretation of Holiday. Day underwent a total transformation to become Holiday. She went from 163 to 124 pounds. She changed her speaking and singing voice — and yes, she’s the one doing all the singing. But the musician didn’t always see herself as Holiday.

"I had to talk her into the auditioning process. It was the craziest f-cking meeting I’ve ever had for an actress that was coming in to get a job from me!" Daniels explained. Fortunately, he managed to persuade Day. He suggested she work with acting coach Tasha Smith and vocal coach Tom Jones. And he got a raw genuine performance out of her that recalls his previous work with then-beginner Gabourey Sidibe and Mo’Nique in 2009’s Precious. Sidibe was nominated for an Oscar for that role, while Mo’Nique won a best-supporting statuette.

A Glitzy Melodrama Where Music, Costumes, Wigs and Makeup Are King

Career-defining performance and history lesson aside, The United States vs. Billie Holiday serves as a period musical with a little bit of romance and lots of glamour. 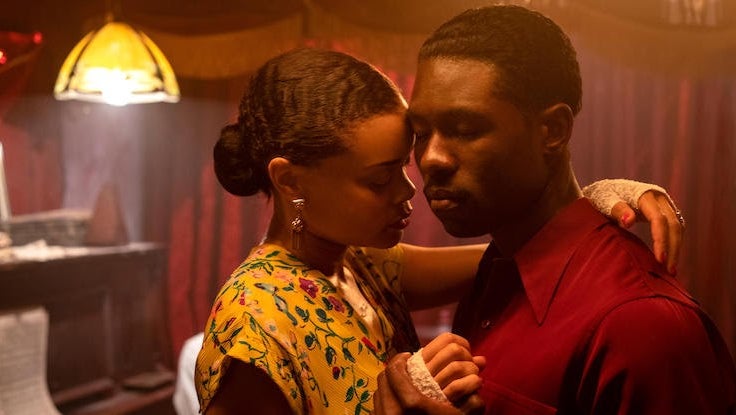 Trevante Rhodes (Moonlight) plays another real-life character in the movie. He’s the undercover federal agent Jimmy Fletcher, someone planted by Anslinger in Holiday’s circle to win her confidence. Fletcher ended up falling in love with Holiday. For Daniels, this was an opportunity to present a Black love story "that we just don’t see — rare, complicated, messy, real."

But you could just watch The United States vs. Billie Holiday for all its great period details. Daniels has talked about the hair and makeup in the movie as being its most challenging part because he wanted to make sure to be period-specific and do it justice. The late Charles Gregory Ross was the head of the hair department and Black hair designer. He did the wigs not only worn by Day, but also by Rhodes and the other men in the movie. And the thing is, just by watching them you wouldn’t notice they’re wearing wigs.

Then there’s the wardrobe. And here is where Holiday’s gowns reign. The United States vs. Billie Holiday’s costume designer Paolo Nieddu collaborated with Italian luxury fashion house Prada to help create some of the looks in the film.

"With the Pradas, there are things on these dresses that are more modern, and that are interpretations, not direct copies of a vintage dress or a direct interpretation exactly like Billie wore. It's derived from a feeling of her," Nieddu explains in the production notes of the film. "At first, I thought it should all be exact. But we talked about it and decided ‘we're not making a biography, we're making art."

And that — an artistic interpretation derived from the feeling of Billie Holiday and the meaning of her career — is exactly how The United States vs. Billie Holiday feels. It takes some narrative licenses, it exposes some history and it shines a new light on an unapologetic Black artist.